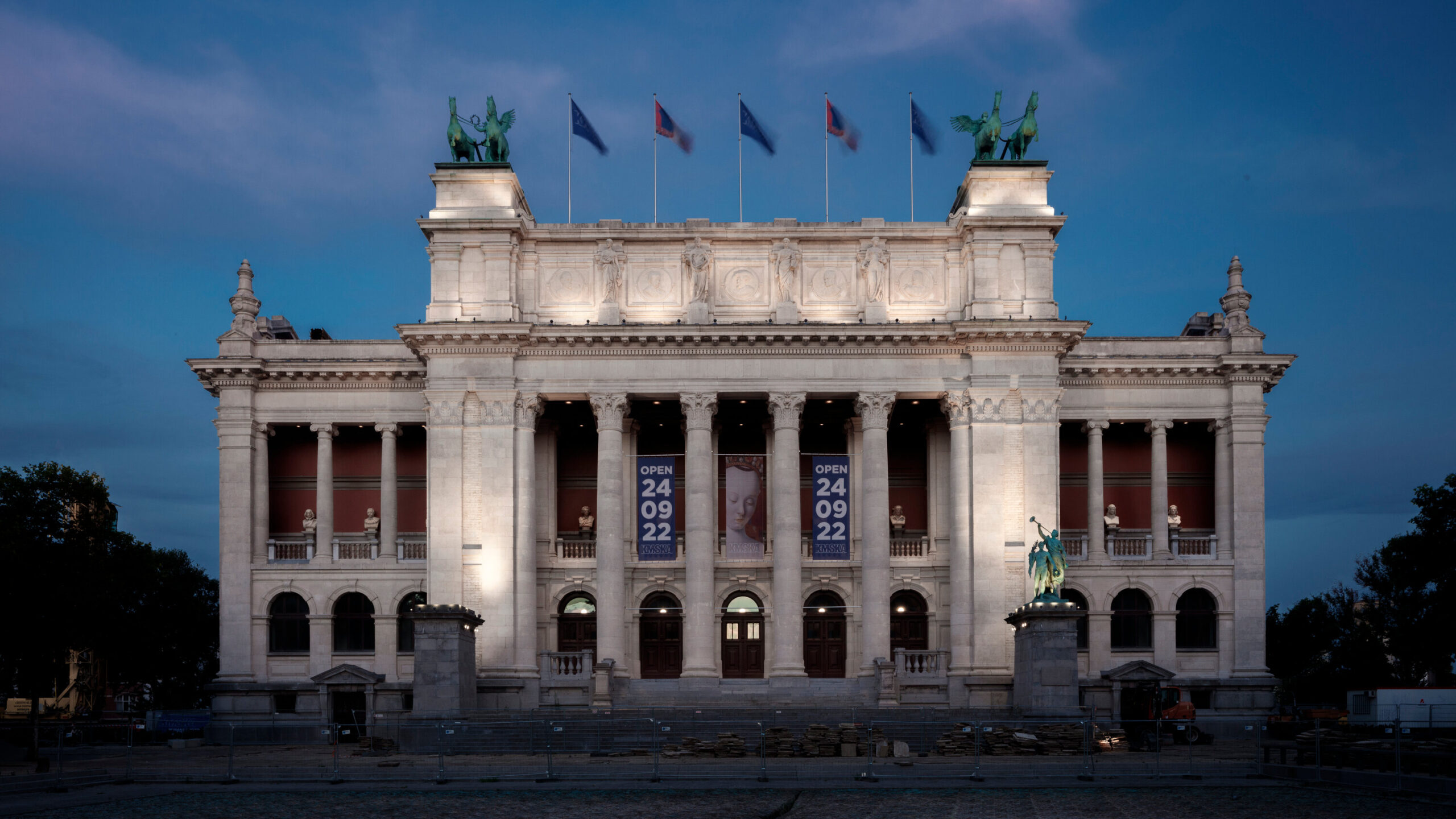 The Royal Museum of Fine Arts Antwerp, known as the KMSKA, is facing a barrage of criticism following its grand reopening in September.

Serious concerns are being raised about the recently reopened Royal Museum of Fine Arts Antwerp (KMSKA) in Belgium. Initial high praise was tempered by consternation over the unusual furniture, including a seat in the shape of a camel, and the white floors, scuffed after a matter of days according to various Twitter commentators and reported in the Flemish daily newspaper De Standaard.

Now—as the backdrop to ongoing protests against funding cuts for Antwerp’s art students—museum professionals, academics, collectors and regular visitors are concerned by matters ranging from aesthetic choices and curatorial decisions to management of staff and finances. The French journalist Didier Rykner declared the museum “a sad failure” in an excoriating attack in La Tribune de l’Art, published on 4 October. The museum’s leadership dismisses the criticisms as coming from conservative voices in the museum world.

Wim Van Driessen, an Antwerp resident who has visited the museum five times since it reopened, was impressed by the architecture, the decor and the condition of the paintings. But, he says, “With a 40% increase in exhibition space, it feels like a missed opportunity to keep so many masterworks in storage. I especially miss the world of Bruegel, one of the most important painters that ever worked in Antwerp, which has almost completely disappeared from view.” Of the 8,400 works in the collection, more than 600 are on display.

The absence of star Flemish painters is not the only criticism levelled at the new hang, and the addition of items such as interactive touch screens have been branded “gimmicks” that “lower the bar” and show a lack of aesthetic sensitivity on the part of the museum’s senior management. “It is the ultimate example of the ‘infantilisation of society’,” says one senior art world figure.

Of the several high-profile critics interviewed by The Art Newspaper, the Belgian collector Marnix Neerman is unique in agreeing to be identified. He told us that the museum’s senior administration is guilty of “amateurism, arrogance and awful taste”. Summarising the influx of communications from art world protagonists that he received following the reopening on 24 September, he says: “It’s a playground. It’s all about fun, and selfies. That’s not the task of a major museum. It’s vulgar.”

The museum’s director Carmen Willems, who was appointed in November 2020, dismisses such criticisms, which she says come from a conservative element within the museum’s audience. She says that KMSKA welcomed 70,000 visitors in its first ten days and that the response has been enthusiastically positive: “On social media, people are overwhelmed by this museum. And that’s because they learn something—and sometimes indeed in a playful way. Why not? It’s not a problem that they learn in this way.”

For some, this perceived lack of gravitas within the museum displays is a symptom of an absence of scholarly heft within the organisation, exemplified by the director herself.

“I would invite you to take a close look at Carmen Willems’s CV and compare it with that of the directors of the Rijksmuseum in Amsterdam, the Museo del Prado in Madrid, the National Gallery in London, the Gemäldegalerie in Berlin, and Vienna etc,” says one anonymous source via email. “It’s also worth listening to some of her statements. She’s a featherweight. The KMSKA deserves much better. The public deserves much better.”

Willems refutes accusations that she is a political appointment: “I am not. I made my career in this [museum] world.” She trained as an economist, and later became the director of the Gallo-Roman Museum in Tongeren, in eastern Belgium, where she worked for more than 20 years and which won the European Museum of the Year in 2011. In 2017, she became the managing director at the KMSKA and is now the general director. “There are different ways to organise a museum, and the conservative thinking about a museum of art is that the general director has to be an art historian,” she says. “We work in another way.”

In March 2020 report by the journalist, Geert Sels in De Standaard Carmen Willems revealed a number of problems at KMSKA that had come to light following the departure of the artistic director Manfred Sellink a month earlier. Sealink’s successor, Jacqueline Grandjean, remained in place for three months and left in January 2022 due to “a difference of opinion”. The museum’s subsequent decision to do without an artistic director, and the continued absence of a comprehensive catalogue of the permanent collection, has fuelled concerns that KMSKA is neglecting its scholarly duties.

An anonymous art historian based in Brussels points out that the current catalogue on the museum’s 14th- to 15th-century paintings was published in 1985. Nico Van Hout, KMSKA’s head of collection research and curator of 17th-century paintings, says that work on an updated catalogue is ongoing and that his team of six curators have been fully occupied with working on the new presentation of the collection. Willems says: “The whole collection is digitised and described in the museum system, which is partially open to the public. Making it fully accessible to the broad public in a professional way is a work in progress. All data is, however, accessible for research.”

In Sels’s report, he presented evidence of incompetence at the museum and disputes with private lenders. Asked why three private loans had failed to materialise, Van Hout and Willems explained in a joint interview with The Art Newspaper that the terms of the loans had been unacceptable to the museum.

The museum also negotiated the long-term loan of 16 important paintings and sculptures with Neerman, including Artemisia Gentileschi’s Mary Magdalene in Ecstasy (1620-25)—a painting he co-owns with a fellow collector. Neerman says that he withdrew these works because “I didn’t trust my collection in the hands of a director who barely knows the difference between Van Eyck and Van Dyck and a politically appointed Chairman of the museum board who thinks Tintoretto is a pizzeria in his voting constituency”. The works are now on loan to several institutions, including London’s National Gallery and the soon-to-be-reopened Quadreria at the Palazzo Ducale in Venice.