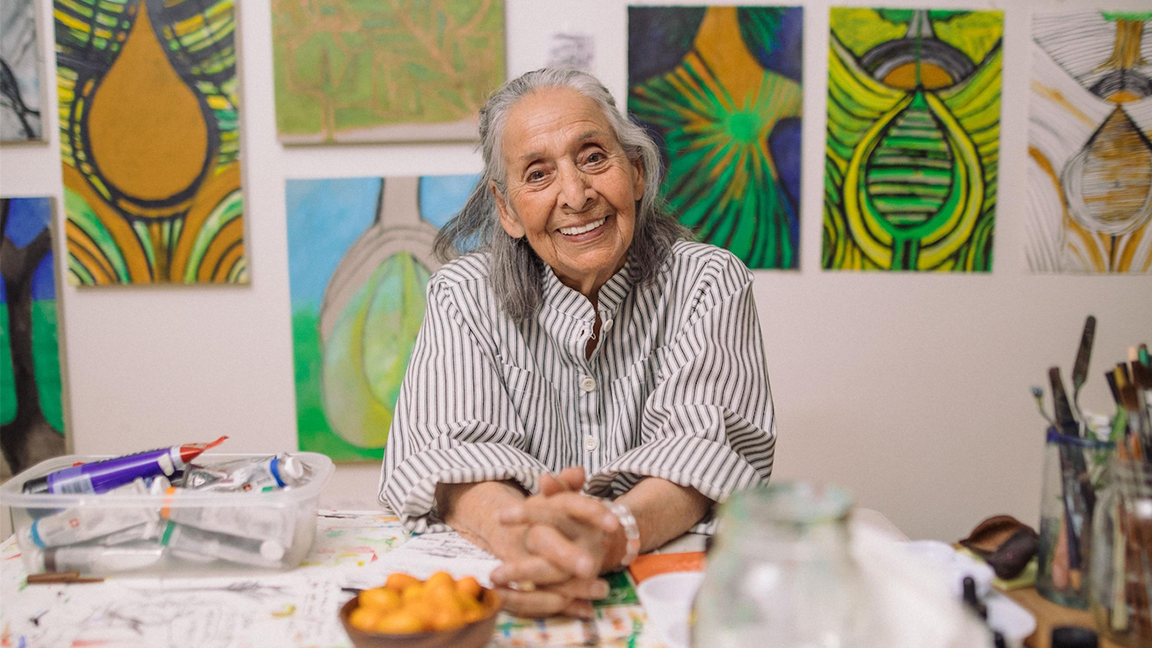 “I never said no to life. I have a responsibility to the world, to my planet.” These words, spoken to me by artist Luchita Hurtado, capture her innate sensitivity to the ever-changing world around her. Her vision of the human body as a part of the world—not separate from nature—is more urgent today than ever. Hurtado’s exceptional oeuvre offers an extraordinary perspective that draws attention to the edges of our bodies and the language that we use to bridge the gap between ourselves and others. By coupling intimate gestures of the body with expansive views of the sky and the earth, she mapped a visceral connective tissue between us all.

My first meeting with Hurtado took place with Bettina Korek, who organized a visit to her studio in 2017. I was immediately impressed by the range and depth of her visionary artistic practice and her energy. It was here that our first interview took place, and since this moment we have had a rich conversation that led to her exhibition at the Serpentine. Born in 1920, Hurtado worked as a painter for nearly 80 years. Her exhibition at the Serpentine Galleries in summer 2019—which I co-curated alongside Rebecca Lewin, exhibition curator, and Joseph Constable, assistant curator—was the first museum retrospective of her work. It subsequently toured to the Los Angeles County Museum of Art in early 2020, where we co-curated the show with Jennifer King.

Revered by many artists, Hurtado was connected through friendship and family to specific movements like Surrealism, the Dynaton movement in the Bay Area, and magical realism, but she maintained her totally unique practice independently, rarely exhibiting her work. Hurtado’s extensive oeuvre is characterized by continuous experimentation, whether this is applied to her subject matter or her materials and methods. Most of all, she has explored the boundaries where the self meets the world, from proposing a radical treatment of the human form as a frame or a landscape to fragmenting the graphic qualities of language into abstract geometries. She has incorporated words into her compositions as a direct form of protest against forgetting our fundamental connection with the world. Her works often, therefore, resist the separation of the body from nature. Unexpected perspectives—looking down or across her own body, or straight up to a glimpse of the sky—offer a view of the world that is both grounded and transcendental. For Hurtado, the interconnectivity between human beings, nature, and the cosmos was heightened after seeing the first images of Earth from space in 1946, and her work since has continued to conceive of all life forms as part of a single, living entity.

On telling me how she came to art, she said, “When I was a child, I had a great sense of smell. I could smell a butterfly when it was breaking the cocoon. I watched the whole procedure, and I think that was a great influence, to see this magic.” It was the butterfly that would continue to be a formative subject for the artist:

I went back to Venezuela in 1955, and in the National History Museum, they left all the doors open. I was going through the museum, and suddenly this beautiful big butterfly—they have amazing insects in Venezuela—flew into the museum and landed on the wall. I went up to see this creature, and I saw my dancing figure on its wings—you know, the head and then the big hands… I thought I was original, you see. But there were my figures on the butterfly wings.

What this beautiful anecdote signifies is Hurtado’s deep sense of our interconnection with nature, a sentiment that she has maintained throughout her entire career. The abstract forms and vibrant colors of nature run seamlessly through her depictions of the human form, which continued to evolve throughout the 1960s in compositions featuring dancing, totemic figures, and other scenes showing figures embracing one another or isolated in a crouched seated position. It is also during this period that Hurtado starts to depict herself more frequently, charting a series of powerful and contemplative acts of looking in self-affirming returns of the viewer’s gaze.

Made over the last three years, these works were a testament to both her energy and dedication as an artist as well as her passionate awareness of our responsibility to the planet. Here, human forms have become intricately woven into an ecological fabric: standing figures becomes trees in forests, open legs give birth to trees, and reproductive organs merge with those of flowers. This synthesis of body and nature is overlaid by placard-like messages; they are both an explicit mode of protest and an illustration of the cyclical connectivity intrinsic to the existence of all life-forms.

The cyclical motion of life, of returning to the body and its connection to nature, is part of Hurtado’s greater work as a planetarian. As she told me, “I feel that I’m a cousin to a tree.” This sense of a continuous return or rebirth is evident in the many lives that exist within each of her works, and the subjects, textures, colors, and moments captured. But Hurtado’s work is not preoccupied with grand depictions of earthly matter, rather her practice is an intimate and delicate one that makes the invisible visible, and levels the illusory hierarchy between our bodies and those of our fellow animals.