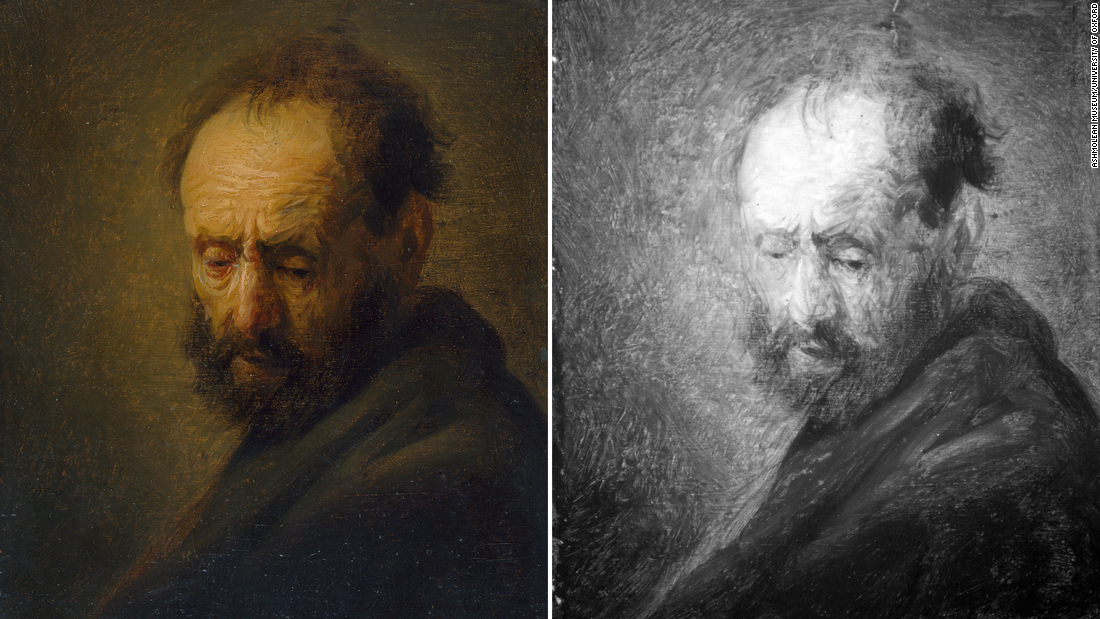 A Rembrandt painting that was thought to be fake and was stashed in a basement for decades may in fact be genuine, according to experts who believe it was painted on wood from the same tree as other 17th century masterpieces.”Head of a Bearded Man” was bequeathed to the University of Oxford’s Ashmolean Museum in 1951, but the Rembrandt Research Project, a leading authority on the Dutch painter’s works, determined in 1982 that it was merely one of a number of copies.

Now, an expert has said that the wood panel on which it was painted came from the same tree used for Rembrandt’s “Andromeda Chained to the Rocks” and Jan Lievens’ “Portrait of Rembrandt’s Mother” — two works dating to 1630 that were painted when the two artists were working in Leiden.

The portrait is one of a number of dismissed Rembrandt works that have been recently re-attributed to the artist. It means the tiny painting is very likely to have come from Rembrandt’s workshop, and may even have been crafted by the Dutch master himself. Peter Klein, an expert in tree dating, analyzed the growth rings of the tree to determine when it was felled.”The Ashmolean’s ‘Head of a Bearded Man’ was painted on a panel which came from an oak tree in the Baltic region, felled between 1618 and 1628, and used in two known works by Rembrandt and Lievens,” Klein said in a statement.

The painting depicts an elderly man with a downcast gaze, which the museum said was typical of Rembrandt’s work at the time.A printed label stuck to the back of the painting was cut out from a Paris auction house catalog from February 1777. It reads: “A Head of an Old Man, painted by Rembrandt. Very (realistic/ true to nature?) colour; height, six pouces by five wide. (sic)”The painting will be displayed in the museum this month as part of the Young Rembrandt exhibition and will then be analyzed further to determine its exact origin.

“Examination of this small painting suggests that prior to the earliest known photograph (published in 1936), touches of paint were added by an unknown hand which has considerably disrupted the subtle illusion of depth and movement,” conservator Jevon Thistlewood said in a statement. “When the exhibition closes we will begin the process of restoring the painting and we can’t wait to see what we find.”A notoriously prolific artist during the so-called Dutch Golden Age, Rembrandt van Rijn produced hundreds of paintings and etchings during his lifetime, resulting in numerous attribution disputes. The Metropolitan Museum’s “Portrait of a Man (The Auctioneer)” and Frick Collection’s “Polish Rider” are among those still debated in the art world. While a number of paintings are now being reconsidered as authentic Rembrandt pieces, with recent analysis overturning decades of assumptions about some works. In 2014, a painting acquired by the UK’s National Trust was revealed to be a genuine self-portrait, after a technical analysis answered longstanding questions over the signature and quality. A year later, the Dutch museum the Mauritshuis declared that it’s disputed painting, “Saul and David,” was in fact genuine, following eight years of research. And in February, a small Pennsylvania museum declared that a 17th-century work called “Portrait of a Young Woman,” long considered the work of someone in Rembrandt’s studio, was by the Dutch master himself.