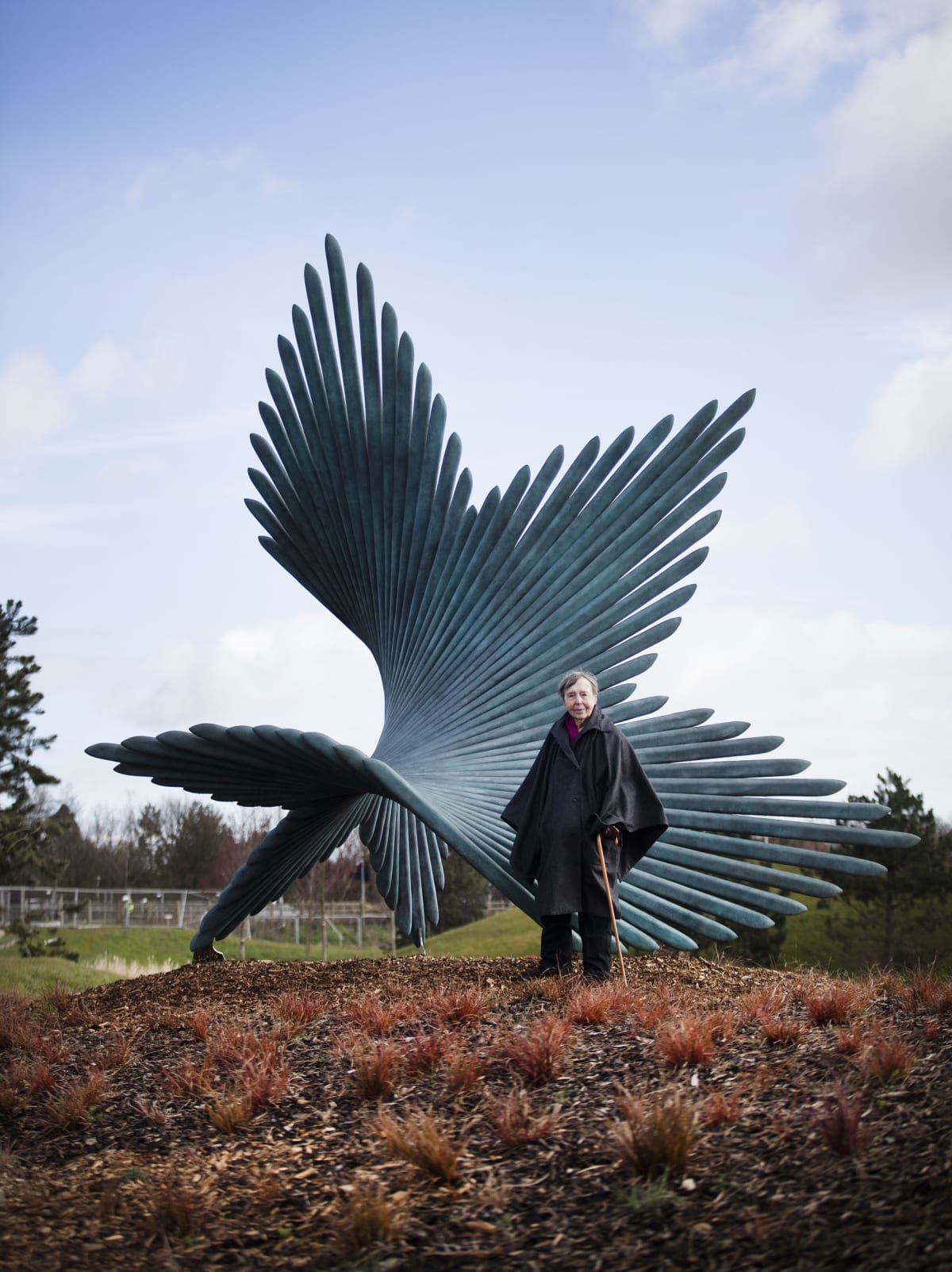 Charlotte Mayer, who has died aged 93, belonged to the generation of Central European Jews who went to Britain as refugees from the Nazis and subsequently made a vital contribution to the country’s cultural life. Memories of the Holocaust, and especially of the murder of her maternal grandmother, Ružena, were translated by Mayer into the jagged, disturbing sculpture Thornflower (2006). Yet even there, the spines at the heart of the composition are combined with more comforting organic shapes, as if to represent life’s “duality”, as Mayer herself put it.

The fact that this curving, floral imagery also has more than a passing resemblance to apple peel is not accidental. Mayer’s use of such natural forms and, sometimes, materials drew heavily on her childhood experiences in Prague, at her grandparents’ home Das Rosel Haus (The House of Roses). Although this villa functioned as a kind of salon for the city’s artists, Mayer herself recalled most vividly deshelling walnuts and making little baskets from horse chestnuts with the housekeeper, Máde.

Nature was indeed to be Mayer’s principal source of inspiration, although she was also affected by her training in postwar London, at what is now Goldsmiths, University of London and then the Royal College of Art, under Frank Dobson and John Skeaping. When, in the 1960s, Mayer resumed her career after bringing up a family, she initially produced human figures reminiscent of Elisabeth Frink, Reg Butler and Germaine Richier, but she quickly showed an openness to different stimuli. A trip to New York in 1967 led to the pieces of painted timber, and later welded steel, entitled Black Cities, while smoke rising from Battersea power station in the early 70s inspired the ring-like sculptures Source, Cascade, Flow and Nebula.

From the mid-60s, the practice of meditation helped Mayer to realise the exact form that such imagery should take. An impression of almost transcendental lightness dominates her production, even when heavy, metallic materials are involved. Her works range from evocations of flowers, trees and vegetable peel, to radiating, wing-like compositions made from bronze quills. For a decade from 1976, she also modelled domestic animals, though she remained primarily an abstract artist. Voids play an important role in her structures, not least in the monumental Caring Hands, made in 1981 for Johnson & Johnson and now owned by Autism Together.

Even at its most rectilinear, Mayer’s art often has an otherworldly quality. Some of her public commissions fell through, or migrated from their intended site to somewhere else altogether, but Ascent (1991) was installed at the Barbican Centre, in London. Its spiral form, composed of a series of stainless steel tubes, and its gleaming surfaces contrast piquantly with the raw concrete architecture that surrounds it. Together, the work and its setting embody modernism’s divergent aims, the fork in the path taken by artists in the second half of the 20th century.

Charlotte was born in Prague, to Helen Marie Stutzova and Kurt Fanta, an administrator in one of his family’s sugar factories. The couple divorced in 1937, by which time Helen Marie had fallen in love with Ludwig Friedrich (“Frederick”) Mayer, a skier, tennis player and communist. In April 1939, a month after the German army entered Prague, she left the city with her daughter, ostensibly to attend a wedding in Amsterdam, but actually with the intention of fleeing to Britain.

In the Netherlands, they were joined by Frederick, whom Helen Marie married the following month in London. Although other members of their family escaped the Holocaust, Helen Marie’s parents refused to leave: Eduard, her father, died in 1941, and in the following year her mother was transported to Treblinka.

During the second world war, Charlotte ended up in Ambleside, Cumbria, which had the distinction of being the wartime home of the Royal College of Art, as well as the dadaist Kurt Schwitters. Initially, however, thanks to the encouragement of her high school teacher, Charlotte trained at Goldsmiths (1945-49) before spending three years in the misogynistic atmosphere of the Royal College. One tutor there told her that she would not become an accomplished artist until she had lost her virginity. As she put it, she resolved henceforth “to be as good a sculptor as possible”. At the college, she also met the architect Geoffrey Salmon, whom she married in 1952.

Mayer’s early work was figurative, in the kind of modernised classical style favoured by her former teacher Dobson. Her alabaster Mother and Child (1953) was clearly too progressive for the maternity wing of the Epsom hospital for which it was intended, and ended up out of sight in a cellar before being broken up. The birth of a son, Julian, in 1956, and twins, Antonia and Louise, three years later, halted Mayer’s career, but its resumption in the 60s was followed gradually by significant commissions and honours.

In 1983 she won the Weldex 83 Arc Art award, and in 1991 was elected a fellow of the Royal British Society of Sculptors, which awarded her its silver medal for the Barbican piece. She also produced delicate works on paper, such as the acrylic Song 2 (2019), with its reprise of her disc-like forms. A retrospective exhibition and the launch of Mayer’s catalogue raisonné is planned for March 2023 at Pangolin London sculpture gallery.