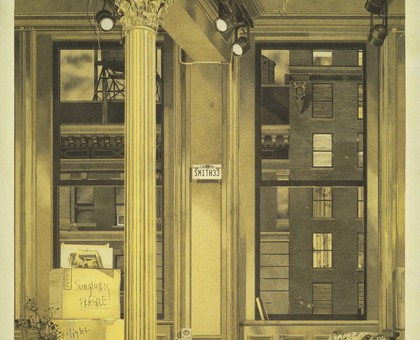 “We find the narcissist in a reflective mood.” — stage directions pencilled into a draft of act III, scene 1 of Alan Smithee’s Goodbye to All This

Bortolami is pleased to announce Goodbye to All This: Alan Smithee Off Broadway, an exhibition by New York-based artist Cynthia Talmadge. “Alan Smithee” is a pseudonym used by Hollywood directors to remove their names from movies over which they have lost creative control. In this exhibition Cynthia Talmadge animates Smithee, imagining him in the mid-1980s as a down-on-his-luck, middle-aged baby boomer, trying, elaborately but ineptly, to revive a career defined by burned bridges, bad behaviour, and commercial failure. The show takes as its premise a fictitious play, an autobiographical avant-garde off-broadway Bildungsroman written and directed by Smithee in an effort to engineer his comeback. The play–entitled Goodbye to All This is what Talmadge imagines as Smithee’s clumsy inversion of the title of Joan Didion’s essay about leaving New York for California – tells Smithee’s version of his rise and fall in Hollywood and his subsequent departure for New York, culminating in his redemption as a New York theatre artist.

The only substance to the real-world “Smithee” is an extensive filmography of more than 80 credits. Talmadge takes this output at face value, envisioning for us the detailed biography and personality of a director whose career persists despite every job he’s done having gone badly awry amidst professional conflict. For Talmadge, this makes him a dubious American icon: an epitome of privilege and unwarranted confidence; a guy who – at least until recently – could only ever fail up.

Serving as the keys to this narrative, three of Talmadge’s large sand paintings depict Playbill covers. Each cover details one of Goodbye to All This’s three acts. Act I, represented by a view of Smithee’s office in Studio City, recounts his early success during the New Hollywood era (the Smithee pseudonym was first used in the late 60s) and his salad days. The office is stuffed with awards, mementoes from his films, photographs of him (his face always artlessly obscured), a boom microphone, and a pair of bicoastal clocks that have fallen out of sync.

By act II, the crisis demanded by plot conventions has happened off-stage, and Smithee has gone into ostentatious “hiding” at a poolside cabana at the Beverly Hilton. The detritus of his breakdown depicted in this Playbill cover includes literature and cassette courses from Scientology, Landmark, and EST; defaced copies of industry trade magazines; military surplus meals; free weights; and past due bills. Absent is any reference to drugs or alcohol – Smithee’s binge is more perfectly American, and his efforts to take control of his life are exactly the sources of its unravelling: self-destruction through self-improvement.

Unfolding in the real space of the gallery in which Talmadge’s exhibition is on view, act III begins when Smithee drives from L.A. to New York, moves into a second-floor loft at 39 Walker Street, and begins another attempt to rehabilitate his career and ego. Just as he previously embodied all the clichés with which Hollywood describes itself to itself, Smithee now arrives in New York determined that downtown Manhattan will be the site of his rebirth as an authentic intellectual. The act III Playbill painting contains a view of Smithee’s apartment, strewn with his Los Angeles patio furniture, boxes of half-unpacked mementoes, his California vanity plates (“SMITH33”), and an Al Hirschfield caricature of him.

A series of eight smaller pointillist paintings portray Smithee’s Maserati, his constant companion and probably the object of his closest emotional attachment. In L.A., the car appears in front of the Director’s Guild building, Chasen’s, the Friars Club, in a dream sequence in the parking lot of the Beverly Hilton, at the Scientology Celebrity Centre, then in New York at Elaine’s and the Lee Strasbourg Institute. It finally comes to rest – windshield covered in parking tickets, tire booted, a U-Haul trailer still hitched to it – in front of 39 Walker Street.

Two related sculptural works complete the exhibition. The first, a theatre set designer’s model of act III of Goodbye to All This, describes the exhibition space in a stylized incarnation as Smithee’s loft, with an iconic fire escape, a rising sun repurposed from a huge film reel, a step pyramid formed from cardboard moving boxes, and forced-perspective versions of the columns found in the gallery, all transplanted into a proscenium stage fronted by a hybrid New York- L.A. skyline. The second sculpture is a life-sized truncated portion of the act III set, including representations of Smithee’s desk, a large box of sunglasses, a column from the loft/gallery, a theatre curtain, and Smithee’s director’s megaphone. This work is made from enamelled copper, glazed to refer to the expressionist lighting scheme of the fictional theatrical production.

As with all of Talmadge’s exhibitions, the show is a unified installation greater than the sum of its parts. Numerous objects appear repeatedly, driving the narrative across paintings and sculptures, and all the works take their palette from combinations of the iconic Playbill yellow and black.

It’s easy to imagine the script for Goodbye to All This as self-aggrandizing, tracing its author’s journey to enlightenment culminating in the creation of the play itself. Talmadge, however, offers ample clues that we’re more likely inside of a collapsing metafiction than we are spectators to a heroic narrative arc. But even within the main narrative, is there a play at all? We can envision, just before the credits roll or the curtain drops, Smithee waking up sweating, still poolside at the Beverly Hilton, bills for Scientology auditing and M.R.E. wrappers piling up, his agent’s answering service not forwarding his messages, Ray Bans. Or perhaps the works in the show actually depict the last of Smithee’s psychic defences crumbling under the weight of his secret torment: he knows that he’s only a ridiculous catalogue of tropes; a synecdoche for big-budget failure; a wan metaphor for certain ugly realities about the intersection of creativity and commerce, or for the damage blithely inflicted (and less-blithely suffered) by narcissists, or for male vanity, the character of a generation, the inconstancy of selfhood. What new crisis is in store for the solipsist when he realizes he’s just a pseudonym, a prop in Talmadge’s ongoing exploration of the public-private American psyche?