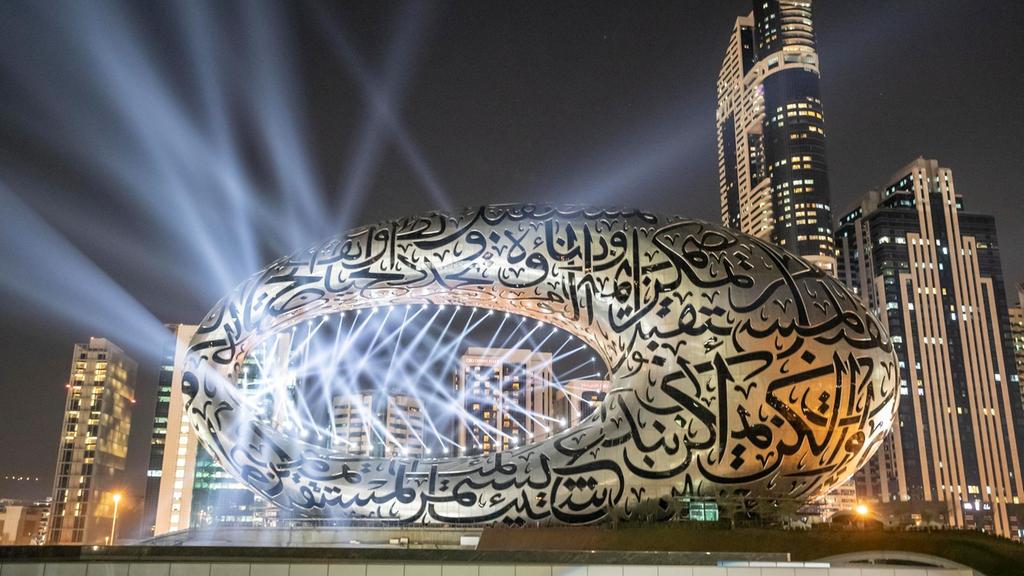 The Museum of the Future, Dubai’s newest architectural marvel, opened to the public this week in a building resembling something like a sci-fi film set.

Designed in a unique curvilinear shape and covered in poetry by Sheikh Maktoum, the late vice president and prime minister of the United Arab Emirates, the museum envisages the world in 2071. Across six floors, it is packed with lucid interactive displays relating to earth, outer space, the mind, body, and spirit.

Designed by Dubai-based studio Killa Design and named last year as one of National Geographic’s most beautiful buildings, the museum is just off Dubai’s main thoroughfare, Sheikh Zayed Road. Surrounded by dozens of skyscrapers, it suggests Dubai’s role in the future.

The foundation combines different government ministries (such as ones devoted to health care and engineering) to act as an incubator for private startups, artists, technologists, and designers of all kinds. The foundation is dedicated to exploring everything from urban planning and space research to computing, gaming, and blockchain technology.

With all the hype this week surrounding the building’s inauguration, which included a dazzling light show and speeches by rulers and major power brokers, the table is now set for the museum to make its stamp as Dubai moves to transition from its oil economy to a tourist-based one and, its leaders hope, into an intellectual hub.

Concluding the inauguration on Tuesday, Sheikh Hamdan bin Mohammed, Crown Prince of Dubai and chairman of the Future Foundation’s board of trustees, said he hoped the museum would be “an intellectual laboratory for cities of the future and governments of the future.”

“It will play a key role in strengthening Dubai’s future position [and] a clear road map for Dubai’s vital sectors,” he added.

While much of that will depend on what the museum does next, it already has a track record, having worked with hundreds of artists and technologists since the organization was founded in 2008.

Visitors to the museum begin by taking an elevator to a makeshift space station. Looking out over the earth, they are presented with a problem: the earth is sick. Each visitor is then given a role to play (doctor, teacher) and tasked with unpacking the world’s problems.

According to Brendan McGetrick, the museum’s creative director, providing that kind of immersive experience is exactly what makes the institution unique.

“When we first started with temporary exhibitions at the World Government Summit in Dubai in 2019, we felt back then, as we do now, that the most urgent crisis we must confront is the crisis of imagination,” he told Artnet news.

McGetrick said he hopes people will realize that the museum ultimately seeks to sort out “the challenges and imperfections of the present and imagine ways in which these problems could provide the inspiration and raw material for a better future.”