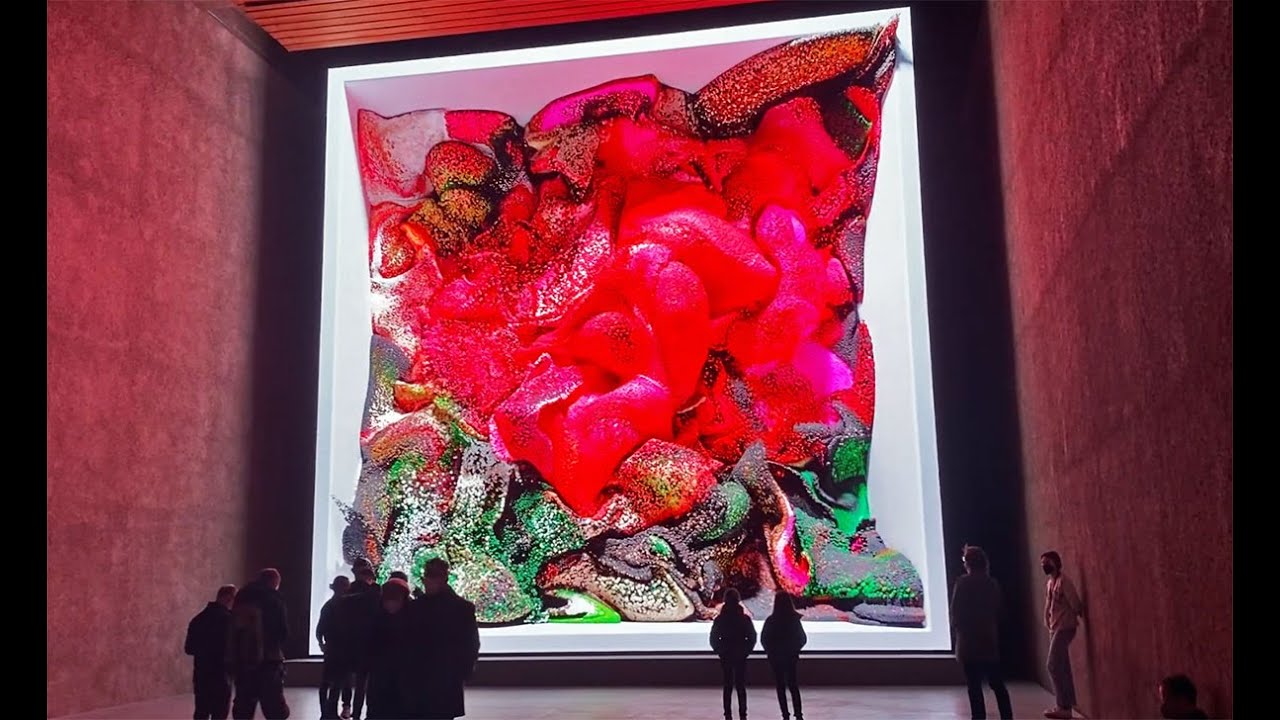 The line snaked down the block when I strolled up to Galerie König on Tuesday night to see Refik Anadol’s new show at the gallery, which is causing a small sensation among a cross-section of the public that does not normally show up at art exhibitions. In the queue was a pair from the finance industry who were trying to get in for the third time. Up ahead, some Albanian tourists from the tech industry were also waiting, having heard about it online. In front of them, one girl said she was too stoned to talk.

At least she had something to trip on while waiting between one and three hours to get in: projected onto König’s brutalist bell tower was an NFT by Anadol called Winds of Berlin, a giant, data-driven projection that warped constantly into vibrant cascades of color informed by real-time data collected from the city’s landscape and environment.

Inside was another massive NFT work occupying an entire wall of the main upstairs gallery, the work’s light washing over the space. People lay around, basking in its glow. The 20-minute algorithmic data visualizations writhed inside what looked like a white box extending from the wall.

Downstairs, a series of abstract digital paintings shifted through strangely bright colors that were indiscernibly culled from images of perennials, forests, and flowers. They pulsated on high-definition screens as crowds of people milled around. The other half of that floor, where traditional artworks are on view, was quietly cordoned off by a velvet rope.

Christian Marclay debuted The Clock, an ambitious 24-hour film project that spliced thousands chronicling every single minute in a day, at White Cube’s London gallery in 2010. It had lines down the street too. David Zwirner’s show of Yayoi Kusama, “Every Day I Pray for Love,” clocked around 2,000 visitors a day in New York when it was on view. So maybe it shouldn’t be surprising that Machine Hallucinations: Nature Dreams, which similarly warps time and space, has caused a bit of a scene on an otherwise quiet residential street, especially given that it’s coupled with buzzy crypto keywords.

König seemed pleasantly stunned at the crowds, though he was also focused on his gallery’s and Anadol’s current auction through OpenSea, which ends this week. So far, the price of Anadol’s piece is at nearly 5 ETH (about $19,000)—a far cry from the $800,000 transaction König organized for a similar work by the artist at Art Basel Miami Beach this month.

“Maybe we should have sold the work as a DAO so that more members of the public could collect the piece,” he ruminated. “We knew this would be risky.”

DAO (decentralized autonomous organizations) are leaderless bands of internet users who are known to make collective decisions on the blockchain. That’s a whole other story, but the art industry began taking them seriously when one called ConstitutionDAO nearly nabbed the winning bid for a first edition of the US constitution at Sotheby’s this fall. Ironically, the crypto-buying conglomerate was scandalously beat by Kenneth Griffin, a hedge-fund billionaire who has been the subject of Reddit and retail investor rage since the whole GameStop saga earlier this year.

The Anadol work shown in the U.S. went to a Miami collector in the usual way of an art deal, with handshakes and fiat money, not on a peer-to-peer NFT sales platform. Bridging these two worlds has been complicated for art dealers thus far, especially in Europe where know-your-customer laws, which are intended to minimize money laundering, are in place.

König’s own web platform, MISA, which will sell NFT editions via proof-of-stake (a consensus mechanism on the blockchain), is figuring out those last kinks, but it can’t carry a titanic art piece like Machine Hallucinations, which is minted via proof-of-work, a method that takes a large amount of computational power. The difference? To use the metaphor of trad artworks, think of it like this: “Proof-of-work you would put into a climate-controlled crate and deliver by hand, the other, you ship with Fedex,” said the dealer.

The two NFT sales Anadol made through König this month were not his first. He had his own direct NFT sale through Sotheby’s Hong Kong this fall, where he set a record by selling an immersive NFT for 18,325,000 HKD ($2.4 million). He also recently collaborated with MoMA in New York on another project. The Istanbul-born artist, who is based in Los Angeles, has also been working on his “Data” paintings for nearly a decade.

Digital artists, of course, bring their own sets of rules, and their language is just as jargon-y as the artspeak of old. The rapid emergence of DAOs, NFTs, and the crypto art scene have been predictably confusing to traditional art-world gatekeepers—a cohort that König, who launched an NFT auction in Decentraland in March before setting up his own NFT marketplace this fall—seems keen to distance himself from. Nor is he the only Berlin dealer moving into the space: Galerie Nagel Draxler is opening a second space that will be called Crypto Cabinet next year, selling and showing all things crypto- and blockchain-related.

The emergence of not one, but two, Berlin galleries keen on crypto is not surprising, given that the city is a new tech capital, soon to have its own Tesla factory on the outskirts of town and already filled with tech coworking spaces on seemingly every corner. Dealers have complained that it’s been hard to attract tech collectors who like money but tend not to cherish culture in the ways people expect. NFTs were the missing ingredient: Unlike a painting, “they are super liquid, so it’s easy to go into a market if you can exit again,” König said.