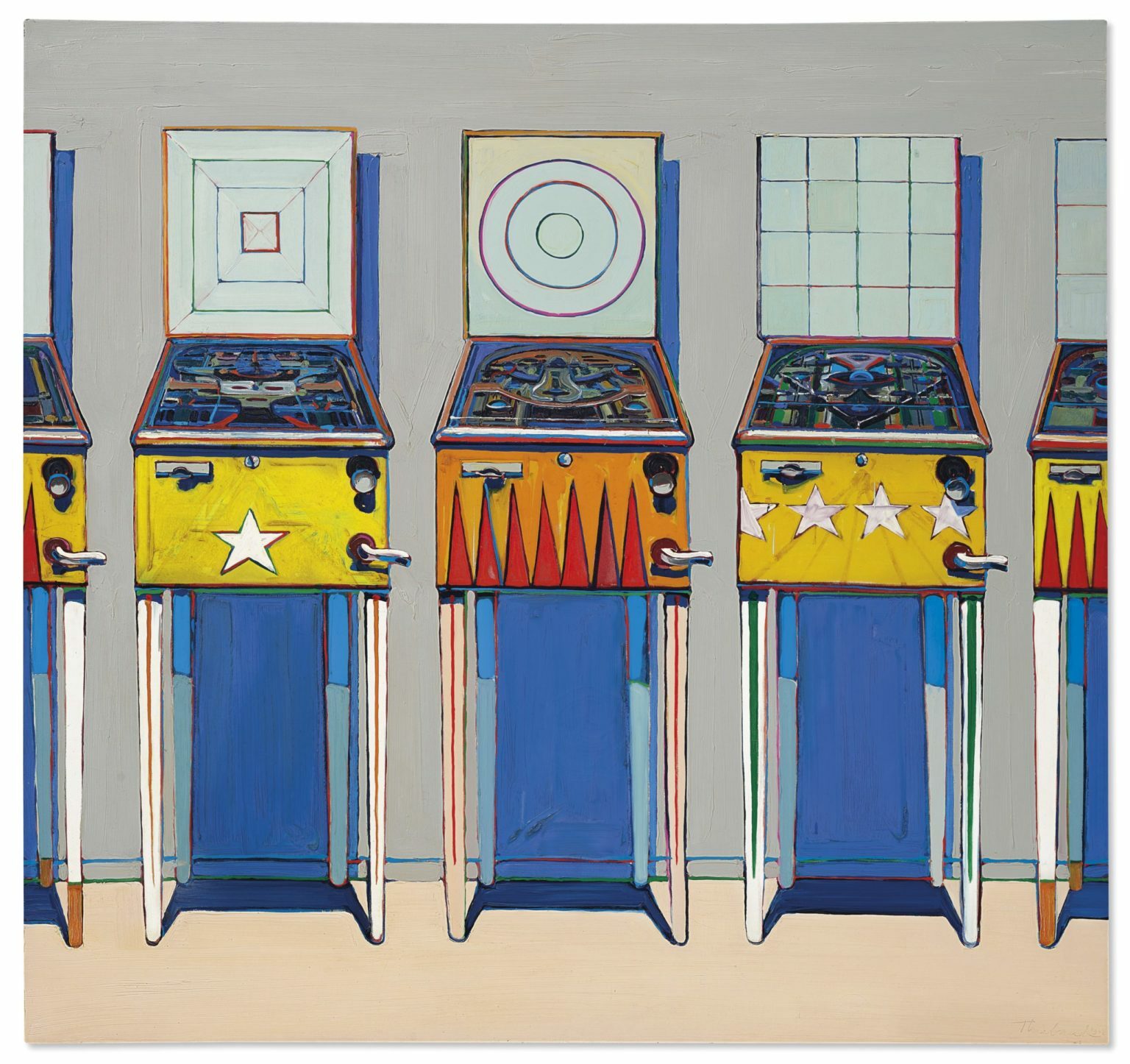 Since the pandemic shut down in March, much anticipation has circulated around the leading works coming to rescheduled auctions in June and July at the top auction houses. Following the announcement of their global “ONE” auction, Christie’s has secured a major work by postwar mainstay Wayne Thiebaud to go up for sale in the New York leg of their marquee modern and contemporary evening auction on July 10. The work is expected to sell for $18 million–$25 million, more than double its existing record of $8.5 million.

Thiebaud completed only several pinball machine paintings similar to the one coming up for auction from 1956–62, of which Four Pinball Machines is the largest. In November 2019, the painter’s work reached a current record high of $8.5 million when Encased Cakes (2011) sold in a Sotheby’s contemporary art evening sale; surpassing an estimate of $6 million–$8 million.

At 5.7 feet by 6 feet, the 1962 painting Four Pinball Machines hails from the artist’s early period in the same year he started showing with New York dealer, Allan Stone. Following his debut at Allan Stone, New York dealer Sidney Janis also featured Thiebaud in the formative 1962 survey of American Pop art in the “International Exhibition of the New Realists.”

According to Christie’s the work is one of the most important from the artist’s oeuvre still in private hands. Out of the public eye for two decades, the works also carries an exhibition record that proves its rank among the most important examples of Thiebaud’s legacy. Following its original purchase from Christie’s in 1981 by elusive real-estate magnate, Donald Bren for just $143,000—in 1985-86 it was showcased at the San Francisco Museum of Modern Art and the Newport Harbor Museum of Art (now the Orange County Museum of Art)—Bren, the founder of Irvine Company donated the land to establish the Newport Harbor institution and serves as a trustee. Later, the work featured in the painter’s seminal traveling retrospective in 2001 at the Whitney Museum. The seller of the work is investment executive Ken Siebel, founder, and chairman of California-based wealth management firm Private Wealth Partners. He bought the work from Bren a year later in 1982 in a deal facilitated by Allan Stone, following the Christie’s sale—where Bloomberg reports, the Siebels attended in person.

Long dubbed a regional artist, it wasn’t until this major Whitney show when, at 80 years old, Thiebaud’s acclaim began to rise. And following his dealer Allan Stone’s death, in 2007, Stone’s estate sale at Christie’s brought a trove of major Thiebaud works to the market, and then again to Sotheby’s in 2011.

“It is always a privilege to have the opportunity to present a painting that is categorically recognized as one of the best works that an artist has ever created, but in this case it is particularly exciting given its prominence within the canon of Pop art” said Alex Rotter, chairman of postwar and contemporary art at Christie’s in New York, noting the painting’s coveted scheme for its “iconic subject imbued with American nostalgia.”

Influenced by the still lifes of Italian modernist Giorgio Morandi, Thiebaud saw his star rise because of his glossy renderings of cakes and diners. Thiebaud’s realist pop style, reminiscent of the golden adage in America, has become a staple of the Pop art movement, and alongside main players like Warhol and Lichtenstein, indicative of American postwar consumerism. Drawing influence from his ad agency days in Los Angeles and New York in the mid-1950s, the centenarian painter’s long-held affinity for commercial art, the basis of appropriation art of the postwar era, has separated him from his New York Pop contemporaries.