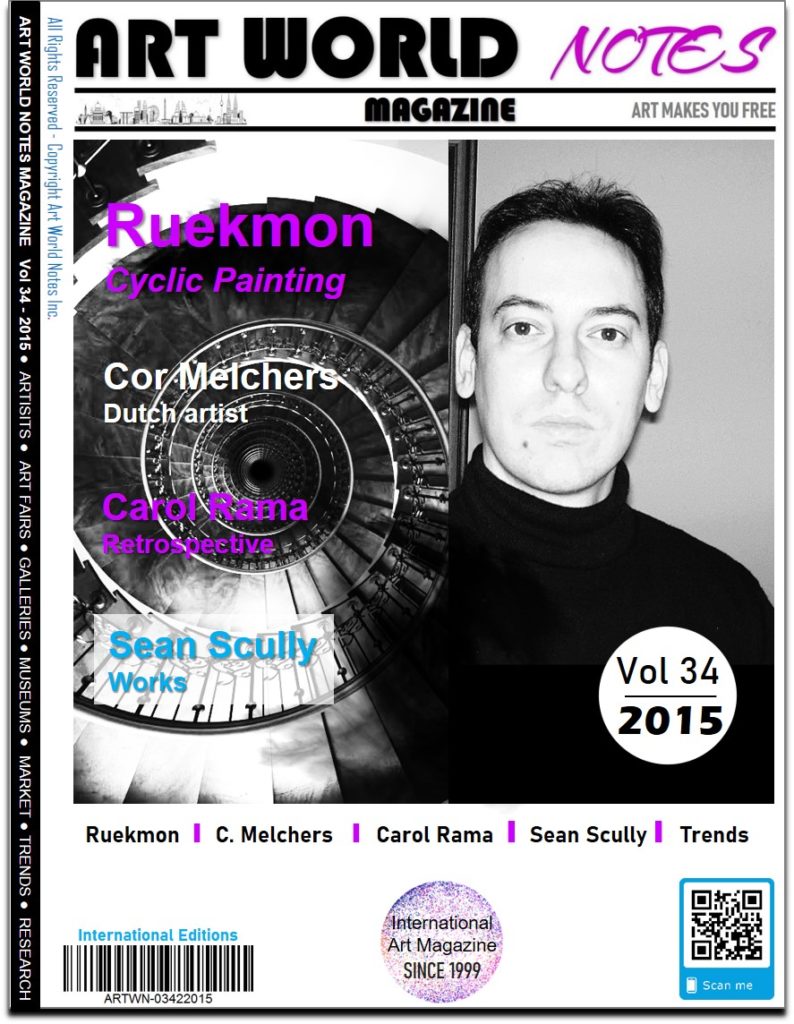 Cover: Ruekmon  (Madrid, 1971) : “I intend my works to reflect the constant and fluctuating movement of life”. I believe that life and its fluctuating movement in time, it generates circles and spirals that feedback; so one cannot exist without the other. It is precisely this flow of ideas, constant change and that no situation is unchangeable forever, which I try to convey in my work. Therefore, in my creation process, I use a style I call “Cyclic Painting“; based on long and fluid strokes and fluent circles in soft spirals.

The spirals have already been representing since ancient civilizations are one of the most common, and present at all geometric shapes levels. Shows a circular motion leaving a central point and extending indefinitely into infinity, symbolizing the rotation, and therefore the evolution progress.

Besides, they evoke the dynamics of the constant cycles of life in which we are immersed and which we are constantly growing and evolving. Moreover, in my style, I combine the use of intense color contrasts with the rupture of the linearity of the image by superimposing levels, so, that my work can convey a certain curiosity; provoking different emotions and feelings to the viewer, regardless of the subject represented.

The Cyclic Painting  is a newly created artistic style that emerged in Madrid, Spain in the middle of the second decade of this century, particularly in mid-2014; and whose highest representative is the plastic artist Ruekmon.

It constitutes the inheritance bequeathed from other well-known pictorial styles such as Figuratism, Expressionism, and Abstraction. Its particularity is to combine some of its foundations harmonically. Because if on the one hand, get to play a real or imaginary figure, on the other, it is given a markedly different entity forms suggesting a subtle and stylish way, always reflecting a deep fluency.

Another peculiarity of this style is to try to break the two-dimensional character of the different levels, achieving in the composition, the elements represented give some sense of three-dimensionality.  In this way, seeks to create more significant interaction with the viewer arouse their curiosity by a slight optical illusion; as a result, a reconciliation between beauty and mysticism is achieved.

The Cyclic Painting also has a good dose of improvisation, immediacy and more or less systematic automation that has been a constant in many pictorial processes of the past, as in the case of different expressionisms or Surrealist artists. Such procedures involve the abandonment of the artist’s will, but it is precisely this attitude that helps repeatedly extolling the idea of a genius artist.