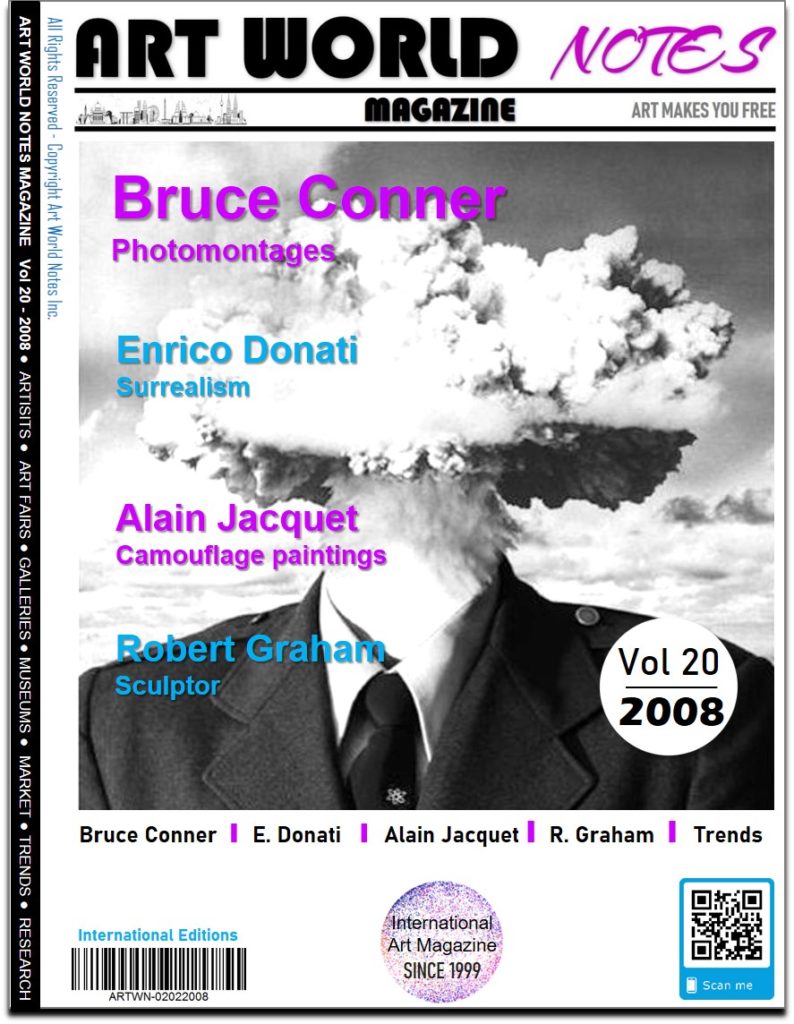 Cover: Bruce Conner (1933–2008) was one of the foremost American artists of the postwar era. Emerging from the California art scene, in which he worked for half a century, Conner’s work touches on various themes of postwar American society, from a rising consumer culture to the dread of nuclear apocalypse

Working simultaneously in a range of mediums, Conner created hybrids of painting and sculpture, film and performance, drawing and printing, including bodies of works on paper utilizing drawing and collage and two important photographic bodies of work, including a haunting group of black-and-white life-sized photograms called ANGELS. An early practitioner of found-object assemblage, his relief and free-standing sculptural objects, such as CHILD (1959) and LOOKING GLASS (1964), were widely recognized for their masterful compositions and daringly dark subject matter.

Equally a pioneer of avant-garde filmmaking, Conner developed a quick-cut method of editing that defined his oeuvre. Incorporating footage from a variety of sources—countdown leaders, training films, and newsreels—and adding later his own 16mm film footage, Conner’s films also focus on disturbing but utterly current themes. For their structural innovation and daring subject matter, films like A MOVIE (1958) and CROSSROADS (1976) have become landmarks of American experimental cinema.

Conner worked in a variety of media from an early age. His first solo gallery show in New York City took place in 1956 and featured paintings. His first solo shows in San Francisco, in 1958 and 1959, featured paintings, drawings, prints, collages, assemblages, and sculpture. The Designer’s Gallery in San Francisco held Bruce’s third solo show. The gallery featured black panels which set off his drawings. One of his paintings, “Venus” was displayed in the gallery window. The painting showed a nude inside a form representing a clam shell. A local policeman confronted the gallery owners to get it removed, “as children in the neighborhood might see the painting.” The American Civil Liberties Union stood behind the gallery’s right to display it, and the matter never became an issue.

Conner first attracted widespread attention with his moody, nylon-shrouded assemblages, complex amalgams of found objects such as women’s stockings, bicycle wheels, broken dolls, fur, fringe, costume jewelry, and candles, often combined with collaged or painted surfaces. Erotically charged and tinged with echoes of both the Surrealist tradition and of San Francisco’s Victorian past, these works established Conner as a leading figure within the international assemblage “movement.” Generally, these works do not have precise meanings, but some of them suggest what Conner saw as the discarded beauty of modern America, the deforming impact of society on the individual, violence, against women, and  consumerism. Social commentary and dissension remained a common theme among his later works.