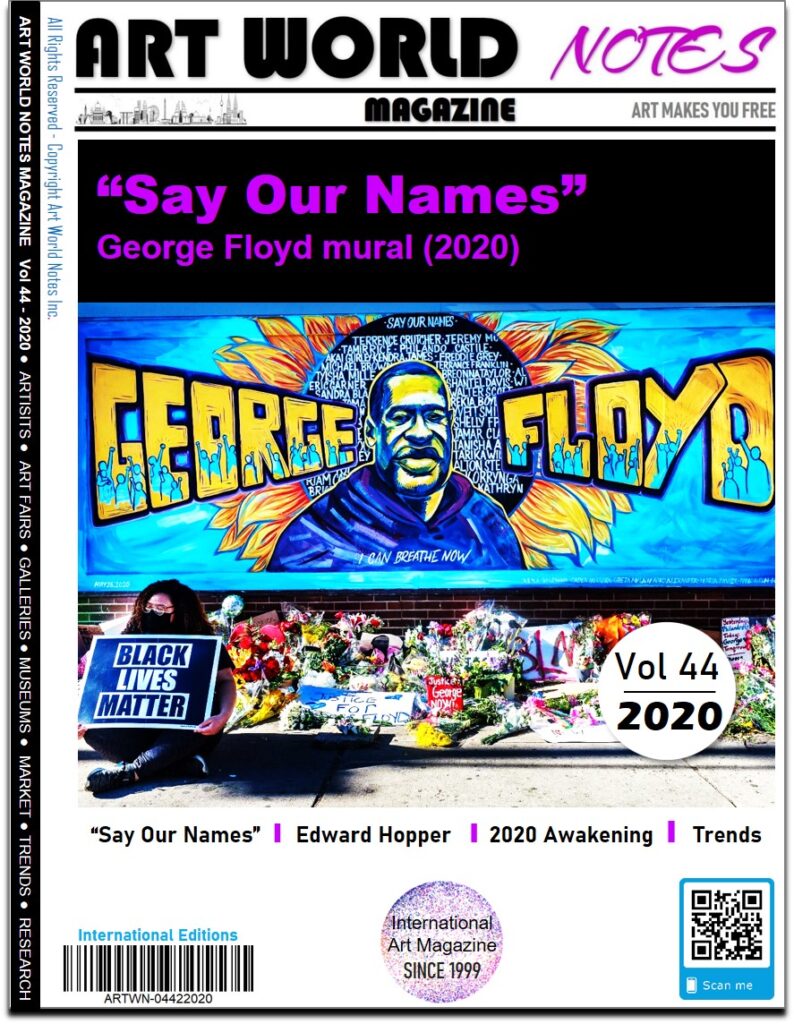 In the wake of the police killing of George Floyd in Minneapolis, protests erupted in cities around the world. Alongside demonstrations, artists and curators were quick to set up initiatives in solidarity with the Black Lives Matter movement, while visual homages to Floyd appeared soon after. The works decorated public spaces from Nairobi to Brussels and beyond, doubling as a rally cry for swift social reform.

Among the most striking and widely shared murals was one painted in Minneapolis by artists Xena Goldman, Cadex Herrera, and Greta McLain, along with a crew of collaborators drawn from the community. In the painting, Floyd is framed by names of Black Americans, including Eric Garner, Freddie Gray, Sandra Bland, and Breonna Taylor, who have been killed by police over the last decade. Above Floyd’s head is a simple phrase eponymous with the movement: “Say Our Names.”

Their piece has since received extensive publicity from outlets such as CNN to the Former President Barack Obama himself. We were lucky enough to speak to one of the mural’s designers and painters, Cadex Herrera, to learn more about the artwork, as well as the community response to the piece.

Q: How and why did you decide to create this mural?
A: Last year, I was part of an apprenticeship program for muralism with an organization called CLUES, which stands for Comunidad de Latinos Unidas En Servicio. CLUES serves the Latin community, as well as the general community, in Minneapolis and St. Paul.
Another classmate of mine, Xena Goldman, messaged me with the idea. She already had an idea for the portrait, but she didn’t have anything for the background and wanted me to design it. And I said, “Yes.” Automatically. Because I wanted to take some action. I was hurt; I was upset; it was really painful to see another human being’s life being taken away in such a devastating and horrific way. So I went ahead and designed the mural.

Q: What was the main idea behind your design?
A: A lot of the time, when things like this happen, the media tries to paint the victim as a criminal. So when I first thought of this idea, I instead wanted the mural to be something positive: I wanted it to be something that uplifted people and also uplifted George Floyd’s memory. I wanted to portray him as a light in his community, as someone who was important to his family, as a human being.

Q: Could you explain the meaning behind some of your design choices?
A: There are several important elements. Of course, the way George’s name is done on the mural… it’s coming from him. That’s his voice. That’s his name being said. Then you have this community inside his name, demanding change, raising their fists in support of George Floyd, and you have the words “say their name.” That connects to all the people who have been killed by the police: I wanted to make sure they were also represented. George Floyd wasn’t the first death, and now—just recently there’s been a murder; another policeman just shot another Black man—now George Floyd is not the last.
Also, the sunflower is a symbol of life, longevity. I thought that was an important symbol. I wanted to use the petals to signify the energy reaching out into his community. On top of that, yellow is one of the colors in the Black Lives Matter logo. So I wanted to tie that in as well.
Additionally, at the bottom, there’s a quote. That part was not done by the artists. We did not want to put words into the mouth of George Floyd, so we did a short poll and asked the community what they wanted us to put there; the consensus was that they wanted us to say, “I can breathe now.” And it was a member of the community, not an artist, who came and painted those words in.

Q: To that end, how did the community react to this mural?
A: Personally, I did not know what to expect when we started: there weren’t a lot of people there at first, just a few people putting flowers at the actual site where he was murdered. But slowly, the crowd started building as we painted. And they were incredibly supportive: a lot of people from the community started coming up and saying, “Can I paint? Can I join?” And we said, “Yes! Get in there.” We gave them a paintbrush, and they got to choose whatever they wanted to paint. It was a community effort.

Q: CBS News characterized the mural as a “beacon for healing.” Do you have any thoughts as to why the mural has become a beacon?
A: I think it’s because the mural is a place to remember George Floyd as a person who touched his community. The mural reflects something positive; that’s why the colors are so bright. When you look at the piece, the first thing that hits you is the brightness of those colors, which allows you to be reflective, but also celebrate a person.
I’m very touched that the mural has become a symbol: a place to heal and reflect and think about your place in George Floyd’s life.

Q: Do you have any advice of teens interested in using their art—as you did—to support the Black Lives Matter movement?
A: One important thing that I’m going to say, is that please make sure that you’re always safe. Always have a buddy with you; make sure that—whatever it is that you’re putting your message on—that it’s okay. Because the last thing I want is that you get hurt or arrested.
That being said, find a group of friends, find a group of people who are for the cause and want to speak up, and get out there. You don’t have to be a great painter or come up with great concepts. Just use the tools that you have now to speak about it. And let’s say that you can’t go out and do a mural. Well, you have a platform: your Instagram, Facebook, Snapchat, Tik Tok. Use those platforms to speak. Don’t be afraid to use technology to speak out against injustice, speak out against police brutality, speak out against systemic racism.
You have every right for your voice to be heard. Especially if you’re a young student of color, you need to go out there, speak as loud as you can, don’t let anyone—anyone—bring you down.