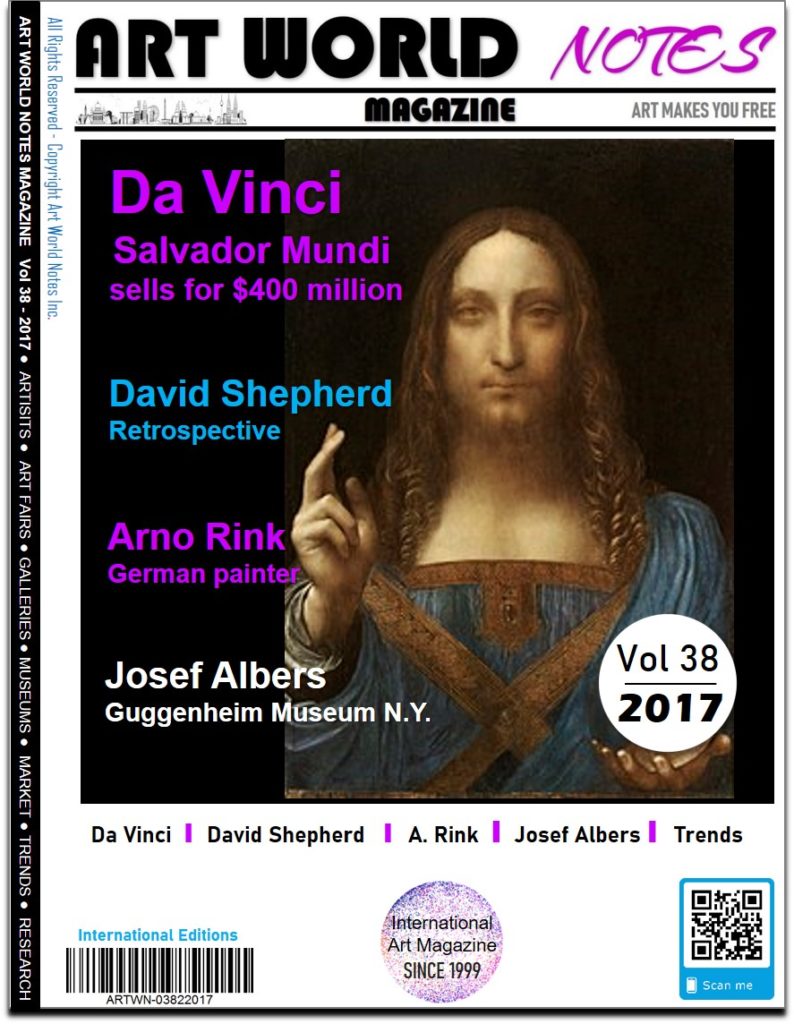 Cover: After 19 minutes of dueling, with four bidders on the telephone and one in the room, Leonardo da Vinci’s “Salvator Mundi” sold on Wednesday night for $400 million, shattering the high for any work of art sold at auction. It far surpassed Picasso’s “Women of Algiers,” which fetched $179.4 million at Christie’s in May 2015. The buyer was not immediately disclosed.

There were gasps throughout the sale, as the bids climbed by tens of millions up to $225 million, by fives up to $260 million, and then by twos. As the bidding slowed, and a buyer pondered the next multi-million-dollar increment, Jussi Pylkkanen, the auctioneer, said, “It’s an historic moment; we’ll wait.”

Toward the end, Alex Rotter, Christie’s co-chairman of postwar and contemporary art, who represented a buyer on the phone, made two big jumps to shake off one last rival bid from Francois de Poortere, Christie’s head of old master paintings.

The price is all the more remarkable at a time when the old masters market is contracting, because of limited supply and collectors’ penchant for contemporary art. And to critics, the astronomical sale attests to something else — the degree to which salesmanship has come to drive and dominate the conversation about art and its value. Some art experts pointed to the painting’s damaged condition and its questionable authenticity.

“This was a thumping epic triumph of branding and desire over connoisseurship and reality,” said Todd Levin, a New York art adviser.

Christie’s marketing campaign was perhaps unprecedented in the art world; it was the first time the auction house went so far as to enlist an outside agency to advertise the work. Christie’s also released a video that included top executives pitching the painting to Hong Kong clients as “the holy grail of our business” and likening it to “the discovery of a new planet.” Christie’s called the work “the Last da Vinci,” the only known painting by the Renaissance master still in a private collection (some 15 others are in museums).

“It’s been a brilliant marketing campaign,” said Alan Hobart, director of the Pyms Gallery in London, who has acquired museum-quality artworks across a range of historical periods for the British businessman and collector Graham Kirkham. “This is going to be the future.”

There was a palpable air of anticipation at Christie’s Rockefeller Center headquarters as the art market’s major players filed into the sales room. The capacity crowd included top dealers like Larry Gagosian, David Zwirner and Marc Payot of Hauser & Wirth. Major collectors had traveled here for the sale, among them Eli Broad and Michael Ovitz from Los Angeles; Martin Margulies from Miami; and Stefan Edlis from Chicago. Christie’s had produced special red paddles for those bidding on the Leonardo, and many of its specialists taking bids on the phone wore elegant black.

Earlier, 27,000 people had lined up at pre-auction viewings in Hong Kong, London, San Francisco and New York to glimpse the painting of Christ as “Savior of the World.” Members of the public — indeed, even many cognoscenti — cared little if at all whether the painting might have been executed in part by studio assistants; whether Leonardo had actually made the work himself; or how much of the canvas had been repainted and restored. They just wanted to see a masterwork that dates from about 1500 and was rediscovered in 2005.

“There is extraordinary consensus it is by Leonardo,” said Nicholas Hall, the former co-chairman of old master paintings at Christie’s, who now runs his own Manhattan gallery. “This is the most important old master painting to have been sold at auction in my lifetime.”

That is the kind of name-brand appeal that Christie’s was presumably banking on by placing the painting in its high-profile contemporary art sale, rather than in its less sexy annual old master auction, where it technically belongs. To some extent, the auction house succeeded with the painting even before the sale, having secured a guaranteed $100 million bid from an unidentified third party. It is the 12th artwork to break the $100 million mark at auction, and a new high for any old master at auction, surpassing Rubens’s “Massacre of the Innocents,” which sold for 76,7 million in 2002 (or more than $105 million, adjusted for inflation).

But many art experts argue that Christie’s used marketing window dressing to mask the baggage that comes with the Leonardo, from its compromised condition to its complicated buying history and said that the auction house put the artwork in a contemporary sale to circumvent the scrutiny of old masters experts, many of whom have questioned the painting’s authenticity and condition.

“It’s been called ‘the male Mona Lisa,’” he said, “but it doesn’t look like it at all.” Mr. Franck said he has examined the Mona Lisa out of its frame five times.

Luke Syson, curator of the 2011 National Gallery exhibition in London that featured the painting, said in his catalog essay that “the picture has suffered.” While both hands are well preserved, he said, the painting was “aggressively over cleaned,” resulting in abrasion of the whole surface, “especially in the face and hair of Christ.”

Christie’s maintains that it was upfront about the much-restored, damaged condition of the oil-on-panel, which shows Christ with his right hand raised in blessing and his left holding a crystal orb.

But Christie’s was also slow to release an official condition report and its authenticity warranty on the Leonardo runs out in five years, as it does on all lots bought at its auctions, according to the small print in the back of its sale catalog.

The auction house has also played down the painting’s volatile sales history.

The artwork has been the subject of legal disputes and amassed a price history that ranges from less than $10,000 in 2005, when it was spotted at an estate auction, to 200 million USD when it was first offered for sale by a consortium of three dealers in 2012. But no institution besides the Dallas Museum of Art, which in 2012 made an undisclosed offer on the painting, showed public interest in buying it. Finally, in 2013, Sotheby’s sold it privately for $80 million to Yves Bouvier, a Swiss art dealer and businessman. Soon afterward, he sold it for $127.5 million, to the family trust of the Russian billionaire collector Dimitry E. Rybolovley. Mr. Rybolovlev’s family trust was the seller on Wednesday night.

There was speculation that Liu Yiqian, a Chinese billionaire and co-founder with his wife of the Long Museum in Shanghai, may have been among the bidders. In recent years, the former taxi-driver-turned-power collector has become known for his splashy, record-breaking art purchases, including an Amedeo Modigliani nude painting for $170.4 million at a Christie’s auction in 2015. But in a message sent to a reporter via WeChat, a Chinese messaging app, Mr. Liu said he was not among the bidders for the Leonardo.

On Thursday morning, soon after the final sale was announced, Mr. Liu posted a message on his WeChat social media feed. “Da Vinci’s Savior sold for 400 million USD, congratulations to the buyer,” he wrote. “Feeling kind of defeated right now.”