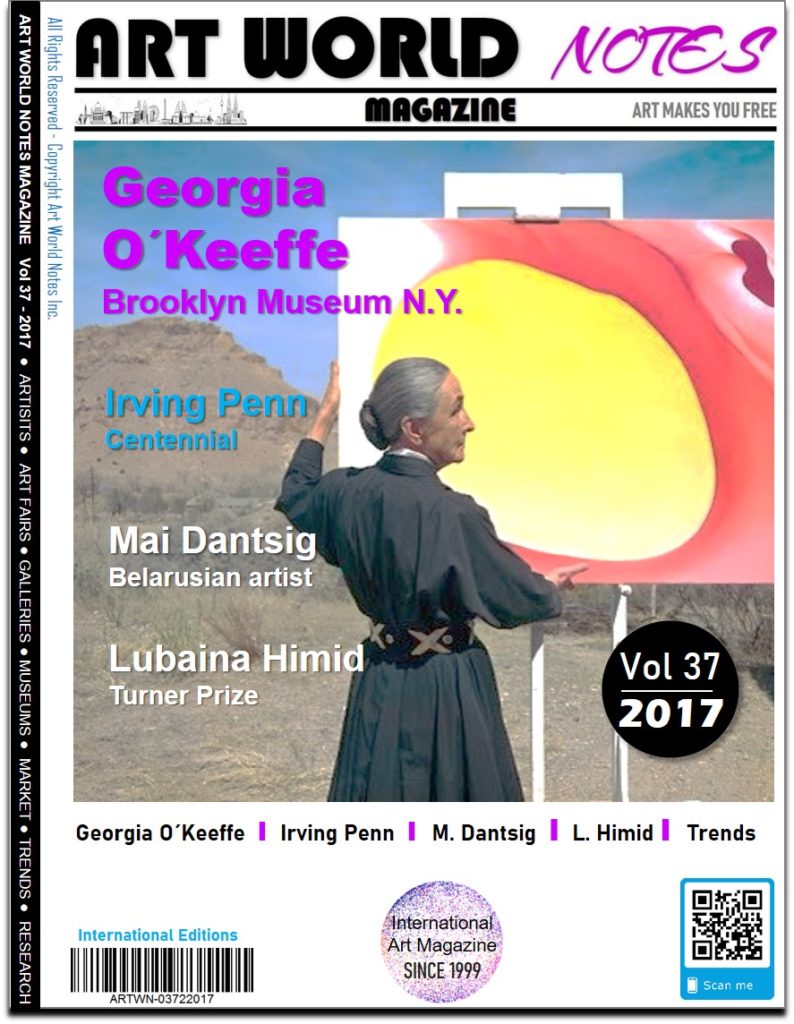 Cover: Georgia O’Keeffe: offers a new look at the iconic American artist’s powerful ownership of her identity as an artist and a woman. This major exhibition examines the modernist persona that Georgia O’Keeffe crafted for herself through her art, her dress, and her progressive, independent lifestyle. It will mark the first time O’Keeffe’s understated yet remarkable wardrobe will be presented in dialogue with key paintings, photographs, jewelry, accessories, and ephemera.

Georgia O’Keeffe: Living Modern represents a homecoming of sorts, as the artist had her first solo museum exhibition at the Brooklyn Museum, in 1927. On view through July 23, 2017, Georgia O’Keeffe: Living Modern is part of A Year of Yes: Reimagining Feminism at the Brooklyn Museum, a yearlong project celebrating a decade of feminist thinking at the Brooklyn Museum.  In addition to a number of O’Keeffe’s key paintings and never-before-exhibited selections from her wardrobe, the exhibition will also feature portraits of her by such  luminary photographers as Alfred Stieglitz, Ansel Adams, Philippe Halsman, Yousuf Karsh, Todd Webb, Cecil Beaton, Bruce Weber, Annie Leibovitz, and others.

These images, along with the garments and artworks on view, testify to the ways that O’Keeffe learned to use photographic sittings as a way to construct her persona, framing her status as a pioneer of modernism and as a style icon.“Fifteen years ago I learned that when Georgia O’Keeffe died and left her two homes to her estate, her closets were filled with her belongings. The O’Keeffe Museum in Santa Fe now owns the homes and their contents, but no one had yet studied the sixty years of dresses, coats, suits, casual wear, and accessories she left behind.I took on that task. The Georgia O’Keeffe who emerged  from my research and is presented in this exhibition was an artist not only in her studio but also in her homemaking and self-fashioning,” says guest curator, Wanda M. Corn, Robert and Ruth Halperin Professor Emerita in Art History, Stanford University.Georgia O’Keeffe: Living Modern opens with an introduction that demonstrates how O’Keeffe began to craft her signature clothing style as a high school student, dispensing with the bows and frills worn by young women at the time. The exhibition continues in four parts. The first is devoted to New York in the 1920s and ’30s, when she lived with Alfred Stieglitz and made many of her own clothes. It also examines Stieglitz’s multi-year, serial portrait project, which ultimately helped her to become one of the most photographed American artists in history and contributed to her understanding of photography’s power to shape her public image. Her years in New Mexico comprise the second section, in which the desert landscape—surrounded by color in the yellows, pinks, and reds of rocks and cliffs, and the blue sky—influenced her painting and dress palette.  A small third section explores the influence and importance of Asian aesthetics in her personal style. The final section displays images made after Steiglitz’s era by photographers who came to visit her in the Southwest.luminary photographers as Alfred Stieglitz, Ansel Adams, Philippe Halsman, Yousuf Karsh, Todd Webb, Cecil Beaton, Bruce Weber, Annie Leibovitz, and others.

“This exhibition reveals O’Keeffe’s commitment to core principles associated with modernism—minimalism, seriality, simplification—not only in her art, but alsoin her distinctive style of dress,” says Lisa Small,Curator of European Painting and Sculpture, BrooklynMuseum, who serves as the exhibition’s in-house coordinator.