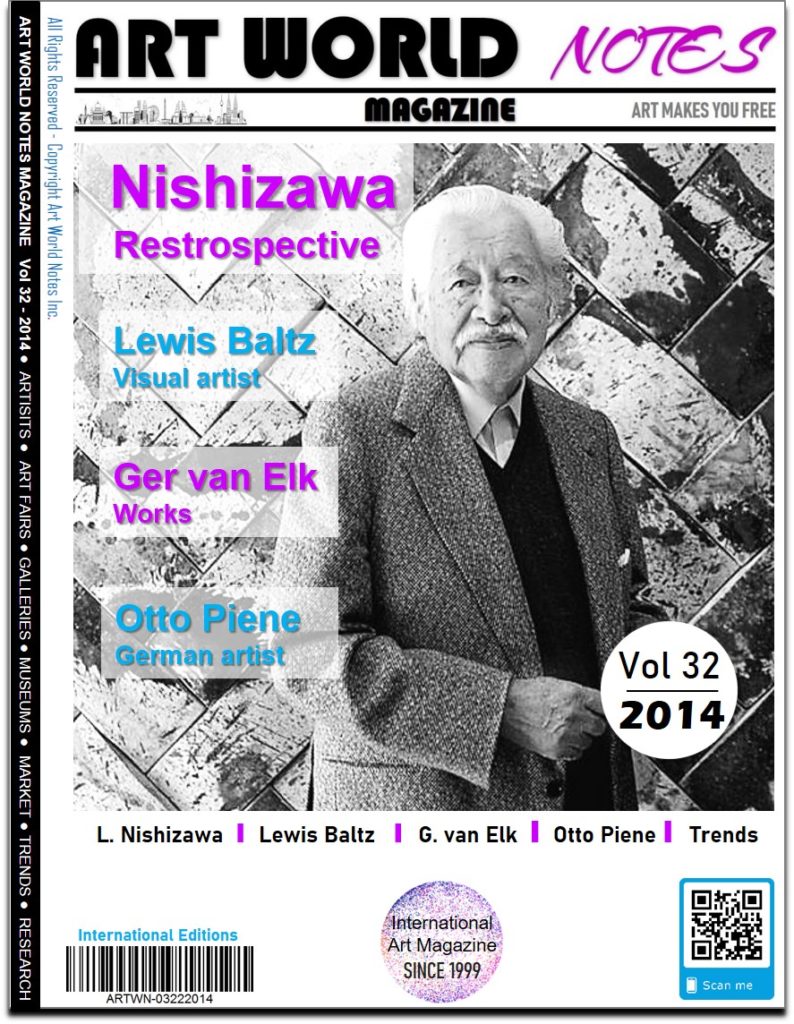 Cover: Luis Nishizawa (1918-2014) Painter, Sculptor. Over his career Nishizawa employed various techniques and styles in his work, with some of his best known work being in ink. He is one of few painters who also draws as an end rather than just a means. Most of his work is dedicated to nature, the universe and the human figure, with much of the imagery influenced by his childhood contact with the landscape of Mexico.

His Japanese and Mexican ethnic heritage is evident in his work, with themes mostly related to Mexico but Japanese style and technique evident, especially with the use of color. Nishizawa was a painter, engraver, graphic artist, sketch artist and ceramicist. His techniques include drawing, watercolor and ink. Most of his works depict landscapes of the central highlands of Mexico such as the Valley of Mexico, areas in Morelos, Guanajuato, Puebla and the State of Mexico.

He is considered to have been one of Mexico’s best landscape artists, known for his paintings of volcanoes.Some of his more important canvases include Paisaje: Valle de México (1947), Paisaje de Yagul (1976) and Pátzcuaro (1960) where the blending of this Mexican and Japanese heritage and training are evident. His works have been exhibited in the Museo de Arte Moderno for over forty years, but most of his works can be found in the permanent collection of the Museo Taller Nishizawa. He created murals, paintings, drawings, ceramic and glass pieces and sculpture.

De Ayer y Hoy at the Teléfonos de México, The work of Nishizawa at the Ruth Hermose Galleries in San Francisco as well as various exhibitions at the Salón de las Plástica Mexicana  and the Instituto Nacional de Bellas Artes, and “Las vacas flacas y los sueños rotos” in various locations and times. In 1995, the Casa de Cultura in Cancún held an exhibition to honor his life’s work. The Institutto Nacional de Bellas Artes y Literature sponsored an exhibition of his life’s work at the Museo Nacional de San Carlos in 2008.

Nishizawa painted his first major mural “El aire es vida y la salud es la mayor riqueza” at the Centro Médico Siglo XXI, with another shortly after in 1969 at the Hospital General de Zona No. 4 in  Celaya, Guanajuato with the name of “El Nacimiento de la Vida” done with high fire ceramics. One of his important works is a ceramic mural done in a Keisei metro station in Japan in 1981. Other murals are found at the Centro Cultural Martí, the Centro Cultural Universitario, the General Archives of the State of Mexico in Toluca, the Procuraduría General de la República and the Secretaría de Educación Pública.One of his most recent murals is “La Justicia,” which was created in the main stairwell of the Mexican Supreme Court for the Bicentennial of Mexico´s Independence in 2010.