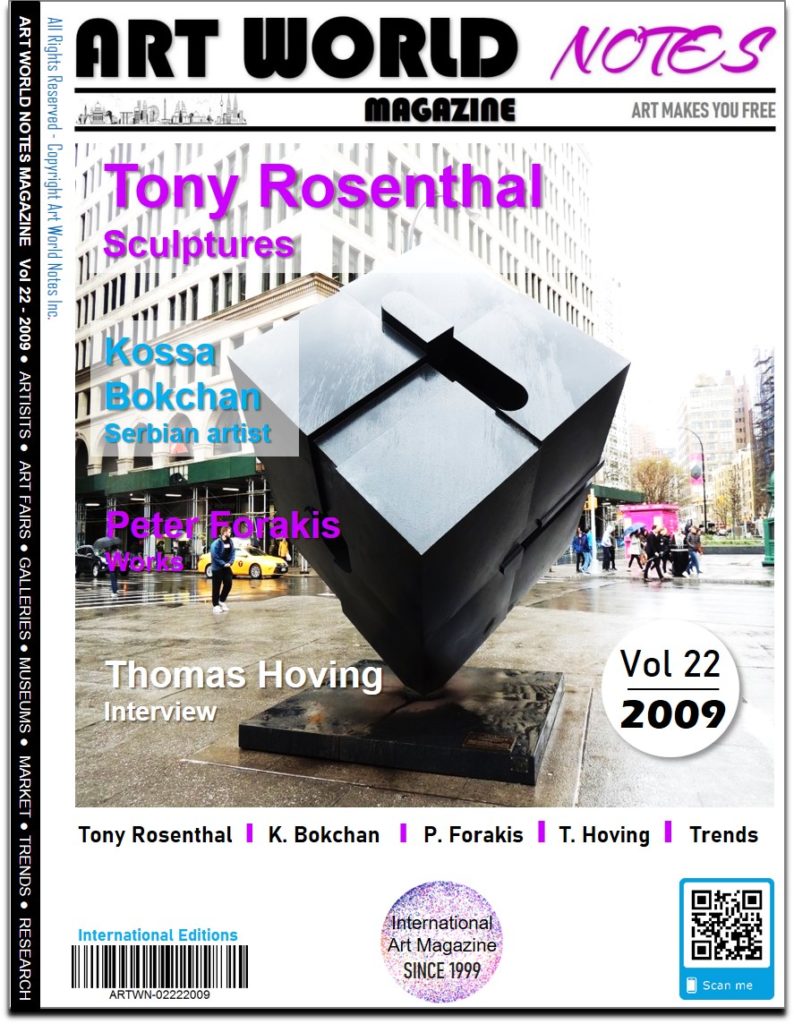 Cover: Tony Rosenthal, who created “Alamo,” the eternally popular revolving black cube in Astor Place in the East Village, and many other public sculptures, died on Tuesday in Southampton, N.Y. He was 94. In sheer visibility, Mr. Rosenthal occupied a leading place among contemporary artists. His five works of public sculpture in Manhattan, and dozens of similar works in Los Angeles, Philadelphia and other cities, guaranteed him a vast audience every week.

“He reminds me of a character actor,” said Joseph K. Levene, his agent. “You know the face but not the name. With him, you know the art.” He was best known for “Alamo,” familiarly called “The Cube” and a neighborhood favorite since it was installed in 1967 as part of the city’s “Sculpture in Environment” program. All 25 works in the program were intended to be temporary installations, but after residents in the Astor Place area petitioned the city, “Alamo” stayed.

A 15-foot-square cube, made of Cor-Ten steel plates, it stands on one point and revolves on a pedestal, which has endeared it to students at nearby Cooper Union, skateboarders who rally around it and East Village tourists

Mr. Rosenthal is also represented in Manhattan by “Rondo” (1969), the gleaming bronze circle in front of the New York Public Library’s branch on East 58th Street; “5 in 1” (1973) at Police Plaza; “SteelPark” (1980) at 80th Street near First Avenue; and “Hammarskjold,” originally installed at Hammarskjold Plaza in 1977 but acquired the next year by the Fashion Institute of Technology on Seventh Avenue at 27th Street.

Bernard Rosenthal was born in Highland Park, a suburb of Chicago. He took sculpture classes at the Art Institute of Chicago during high school and decided on his career after seeing plaster reproductions of the work of the Russian sculptor Alexander Archipenko at the University of Michigan, where he earned a bachelor’s degree in 1936.

On returning to Chicago, he approached Archipenko, who was living in Chicago at the time, and arranged to receive lessons in exchange for casting some of Archipenko’s terra-cotta figures. Mr. Rosenthal, who worked in a semirealistic figurative style, did his first commission, “A Nubian Slave,” for the Elgin Watch Company building at the 1939 World’s Fair. Soon after he enrolled in Cranbrook Academy of Art, eager to study with the figurative sculptor Carl Milles. In World War II Mr. Rosenthal was shipped by the Army Corps of Engineers to Britain, where he commanded a unit of artists making topographic models. At the end of the war he taught art to soldiers waiting to return home from France.

In 1946 he married Halina Kolowicz, a student in one of his classes, who, after he later moved to New York, became president of the Friends of the Upper East Side Historic Districts. She died in 1991. His wife, Cynthia, is his only immediate survivor.

Encouraged by Charles and Ray Eames, whom he had befriended at Cranbrook, Mr. Rosenthal moved to Los Angeles, where he found himself in great demand to produce sculpture for the many buildings going up in Los Angeles. In 1952 he became the first instructor of sculpture at the University of California, Los Angeles.

His work has been included in exhibitions at the Metropolitan Museum of Art, the Museum of Modern Art and the Whitney Museum of American Art.

In 1960, as his style turned to geometric abstraction, he moved to New York and began showing with the dealer Sam Kootz, who persuaded him to use his nickname, Tony, professionally. He was later represented by Knoedler and André Emmerich. In 2001 he moved to Southampton.

Mr. Rosenthal exhibited all over the world. In 1999 Rizzoli published a monograph about his work, “Tony Rosenthal,” with a forward by Edward Albee.

A hard-working and prolific artist into his 90s, he found that one honor eluded him.

“He never had a retrospective, but that’s all right,” Mr. Levene said. “He has one every day on the streets of New York.”