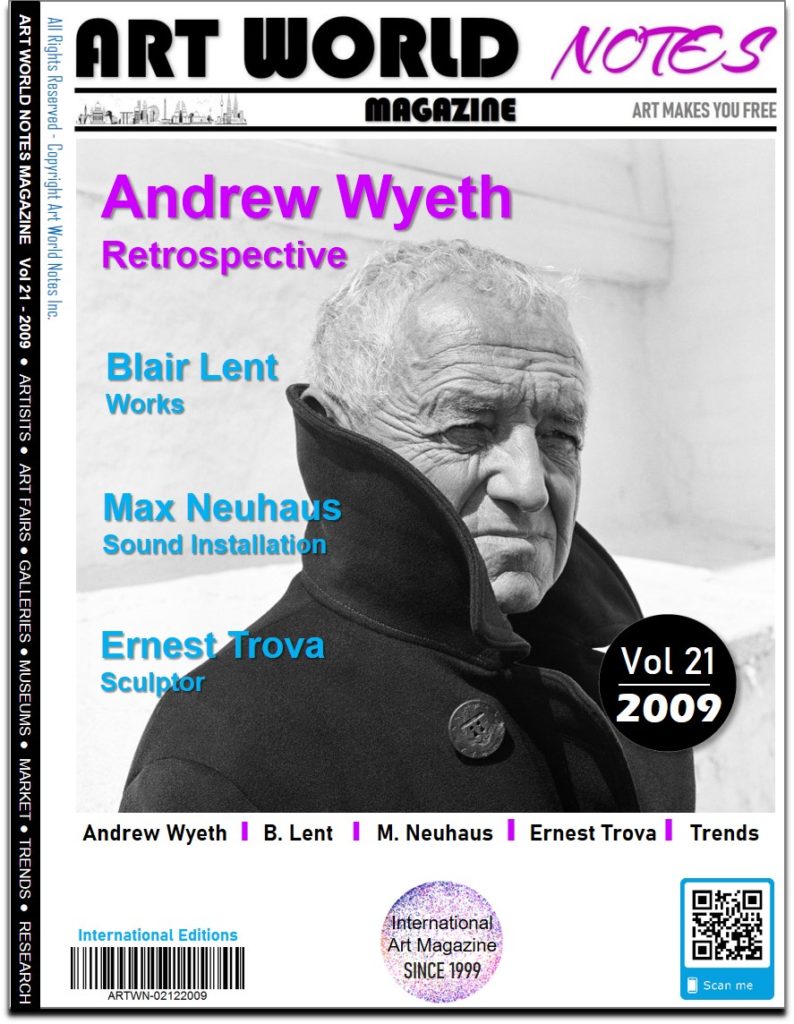 Cover: Andrew Wyeth, one of the most popular and also most lambasted artists in the history of American art, a reclusive linchpin in a colorful family dynasty of artists whose precise realist views of hardscrabble rural life became icons of national culture and sparked endless debates about the nature of modern art, died Friday at his home in Chadds Ford, Pa. He was 91.

Wyeth died in his sleep at his home in the Philadelphia suburb of Chadds Ford, according to Jim Duff, director of the Brandywine River Museum.The son of famed painter and book illustrator N.C. Wyeth, Andrew Wyeth gained wealth, acclaim and tremendous popularity on his own. But he chafed under criticism from some experts who regarded him as a facile realist, not an artist but merely an illustrator.

“He was a man of extraordinary perception, and that perception was found in his thousands of images — many, many of them iconic,” Duff said Friday in an interview. “He highly valued the natural world, the historical objects of this world as they exist in the present and strong-willed people.” A Wyeth retrospective at the Philadelphia Museum of Art in 2006 drew more than 175,000 visitors in 15Â½ weeks, the highest-ever attendance at the museum for a living artist. The Brandywine River Museum in Chadds Ford, a converted 19th-century grist mill, includes hundreds of works by three generations of Wyeths.

Wyeth even made “Peanuts,” in a November 1966 comic strip: After a fire in his dog house destroys his van Gogh, Snoopy replaces it with an Andrew Wyeth. It was in Maine that Wyeth found the subject for “Christina’s World,” his best-known painting. And it was in Pennsylvania that he met Helga Testorf, a neighbor in his native Chadds Ford who became the subject of the intimate portraits that brought him millions of dollars and a wave of public attention in 1986.

The “Helga” paintings, many of them full-figure nudes, came with a whiff of scandal: Wyeth said he had not even told his wife, Betsy, about the more than 200 paintings and sketches until he had completed them in 1985. Wyeth’s world was as limited in scale, and as rich in associations, as “Christina’s World,” which shows a disabled woman looking up a grassy rise toward her farm home, her face tantalizingly unseen. “Really, I think one’s art goes only as far and as deep as your love goes,” Wyeth said in a Life magazine interview in 1965.

“I don’t paint these hills around Chadds Ford because they’re better than the hills somewhere else. It’s that I was born here, lived here — things have a meaning for me.” Paradoxically, he said, he loved Maine “in spite of its scenery. There’s a lot of cornball in that state you have to go through — boats at docks, old fishermen, and shacks with swayback roofs. I hate all that.” Wyeth was a secretive man who spent hours tramping the countryside alone. He painted many portraits, working several times with favorite subjects, but said he disliked having someone else watching him paint. Much of Wyeth’s work had a melancholy feel — aging people and brown, dead plants — but he chose to describe his work as “thoughtful.”

“I do an awful lot of thinking and dreaming about things in the past and the future — the timelessness of the rocks and the hills — all the people who have existed there,” he once said. “I prefer winter and fall, when you feel the bone structure in the landscape — the loneliness of it — the dead feeling of winter. Something waits beneath it; the whole story doesn’t show. “I think anything like that — which is contemplative, silent, shows a person alone — people always feel is sad. Is it because we’ve lost the art of being alone?”

Wyeth remained active in recent years and President Bush presented him with a National Medal of the Arts in 2007. But his granddaughter, Victoria Wyeth, told The Associated Press in 2008 that he no longer gave interviews. “He says, ‘Vic, everything I have to say is on the walls,’” she said. Wyeth was born July 12, 1917, in Chadds Ford, the youngest of N.C. Wyeth’s five children. One of his sisters, Henriette, who died in 1997, also became an artist of some note, and one of his two sons, Jamie, became a noted painter. His other son, Nicholas, became an art dealer.

N.C. Wyeth, the only art teacher Wyeth ever had, didn’t always agree with his son’s taste. In a 1986 interview with the AP, Wyeth recalled one of the last paintings he showed to his father, who died in 1945. It was a picture of a young friend walking across a barren field. “He said, ‘Andy, that has a nice feel, of a crisp fall morning in New England. You’ve got to do something to make this thing appeal. If you put a dog in it, or maybe have a gun in his hand,’” Wyeth recalled. “Invariably my father talked about my lack of color.” Wyeth and his painting were dramatically affected when his father passed away, Duff said Friday.

“He was far less colorful after his father’s death,” he said. “He wanted you to understand that life was a difficult proposition.” The low-key colors of Wyeth’s work stem partly from his frequent use of tempera, a technique he began using in 1942. Unlike the oil paint used by most artists today, tempera produces a matte effect. Wyeth had his first success at age 20, with an exhibition of Maine landscapes at a gallery in New York. Two years later he met his future wife, Betsy James. Betsy Wyeth was a strong influence on her husband’s career, serving as his business agent, keeping the world at bay and guiding his career choices.

It was Betsy who introduced Wyeth to Christina Olson. Wyeth befriended the disabled elderly woman and her brother, and practically moved in with them for a series of studies of the house, its environs and its occupants. The acme of that series was “Christina’s World,” painted in 1948. It was Olson’s house, but the figure was Betsy Wyeth. Another well-known Wyeth series was made at the home of Karl Kuerner, whose Pennsylvania farm bordered the spot where Wyeth’s father was killed in a car-train accident.

Before his father died, Wyeth once said, “I was just a clever watercolorist — lots of swish and swash. … (Afterward), for the first time in my life I was painting with a real reason to do it.” The Kuerner paintings often have an undertone of menace, a heavy ceiling hook or the jagged edge of a log outside a sun-warmed room. It was at Kuerner’s farm that Wyeth met Testorf, a German emigre who cleaned and cooked for Kuerner.

“I could not get out of my mind the image of this Prussian face with its broad jaw, wide-set eyes, blond hair,” Wyeth said. Wyeth painted Testorf from 1970 to 1985, but didn’t show his wife any of the pictures until 1981. In 1985, he revealed the full series to her, and declared he wanted them sold. The buyer, Leonard Andrews, reportedly paid $6 million to $10 million for them.

The Helga paintings created a sensation when their existence was revealed in 1986, in part because many were nudes and because of Betsy Wyeth’s provocative answer when asked what the works were about. “Love,” she said. “He’s a very secret person. He doesn’t pry in my life and I don’t pry in his. And it’s worth it,” she said. After 1985, Wyeth painted Testorf at least three more times. The exhibition of the Helga paintings at the National Gallery of Art in Washington drew tens of thousands, but it renewed the dispute between Wyeth’s admirers and his equally passionate detractors.

The Metropolitan Museum of Art in New York pointedly refused to accept the exhibition. And it turned out that the original stories about the collection overstated things, since some of the Helga paintings had been exhibited earlier and Betsy Wyeth had been aware of some of them. Andrews sold the Helga collection in 1990 to a Japanese industrialist for $40 million to $50 million, dealer Warren Adelson said in 2006, when he was handling the private sale of some 200 of the works. Adelson didn’t identify the industrialist. “The heart of the Helga series is that I was trying to unlock my emotions in capturing her essence, in getting her humanity down,” Wyeth was quoted in the catalog to an exhibition Adelson organized.

Some critics dismissed Wyeth’s art as that of a mere “regionalist.” Art critic Hilton Kramer was even more direct, once saying, “In my opinion, he can’t paint.” The late J. Carter Brown, who was for many years director of the National Gallery, called such talk “a knee-jerk reaction among intellectuals in this country that if it’s popular, it can’t be good.”

“I think the man’s mastery of a variety of techniques is dazzling, and I think the content is in many cases moving,” Brown said. Wyeth is survived by his wife and two sons. Funeral services will be private. A public memorial service is being planned at the Brandywine River Museum.