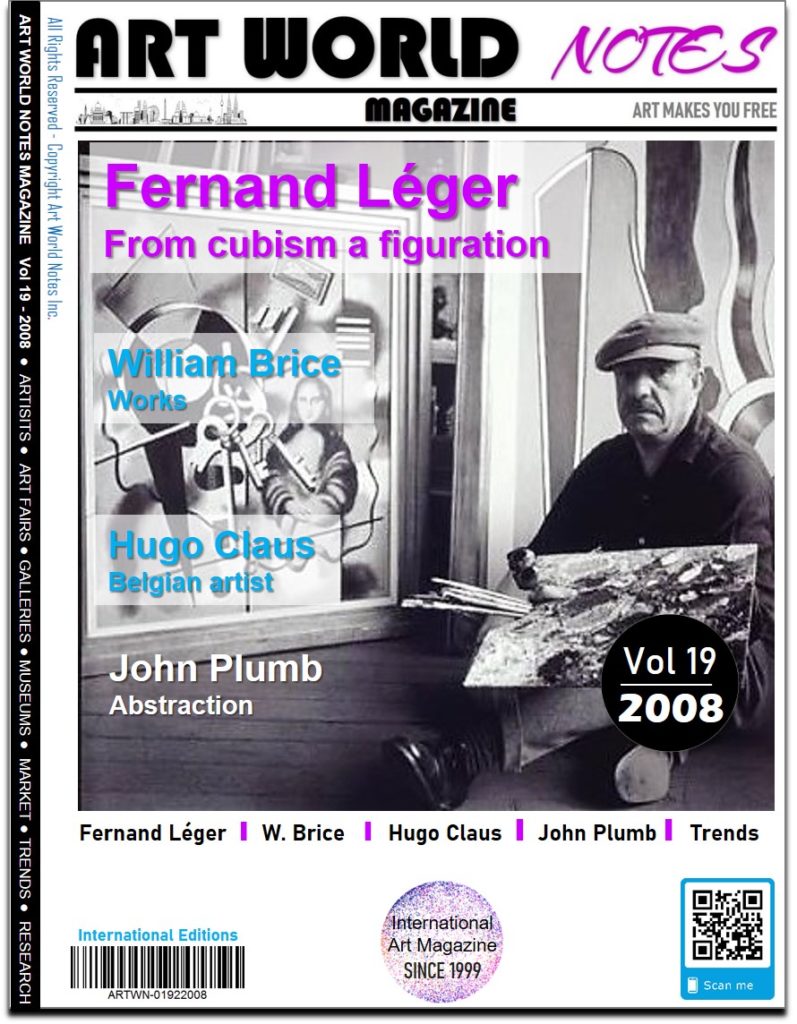 From cubism a figuration

Cover: Fernand Léger is considered one of the forefathers of Pop Art. But Léger first became known for the unique variation of Cubism he created, dubbed Tubism for its use of cylindrical forms. When Pablo Picasso and Georges Braque first developed Cubism, they were exploring ways of showing the heightened reality of their subject matter.

They divided their subjects into geometric planes, depicting multiple simultaneous perspectives to imply movement and the passage of time.  But Léger saw a different type of potential hiding within the Cubist visual language. Rather than appreciating it for its academic treatment of subject matter, he valued its potential to objectify art, and to reduce it to its formal, plastic elements. In the hands of Léger, the aesthetics of Cubism became a democratizing force, one that freed artists to explore color, form and composition in new, unsentimental ways. This, he believed, was thoroughly modern.

The “modest and little” Statue of Liberty, a gift from his country, did not impress Fernand Leger as he watched from the deck of a liner sailing into the inner harbor of New York Bay in 1931. But the artist was immediately fascinated by the sight of the Manhattan skyline, describing it in a French art magazine as “the most colossal spectacle in the world.” Leger had arrived for his first of four stays in the United States, including five years of exile during World War II. This left a lasting impact on his work. But a show at the Beyeler Foundation museum also seeks to demonstrate the French painter’s influence on American artists of the pop-art generation.

For curator Philippe Buettner, the exhibition presents Leger “as an artist whose work today is in a dialogue with that of his American grandsons.” On view are more than 120 canvases, sketches and drawings by Leger jointly exhibited with 25 works by Americans, ranging from Roy Lichtenstein and Ellsworth Kelly to Andy Warhol. All are on loan from museums and private collectors in the United States, Europe and Israel.

“The Americans not only worked on his concepts, they developed them,” Buettner said. “Seeing them together, you discover new things in Leger.” The show, which runs through Sept. 9, covers the key phases in the work of Leger, one of the principal figures in the revolutionary cubist art movement. Some critics rank him as a peer to Picasso and Georges Braque.

“La Grande Julie” (“Big Julie”) was done during his U.S. exile in 1945, long after he had turned from abstract art to a more figurative approach. It is on the cover of the exhibition catalog. Lent by New York’s Museum of Modern Art, the canvas was once described by Leger as a “culmination” in career.

Leger did not like prettiness or “good taste.” After a solo show in New York in 1935, a newspaper headlined, “Leger advises painters not to use beautiful women as models.” But he spoke with enthusiasm of the New York neon signs, an experience reflected in his bold coloring. A monumental 1943 piece on display is a 12-foot-by-34-foot image from Leger’s “divers” series in which the limbs of the divers are scattered across the image. Writing in the catalog, curator Buettner said Leger’s assemblagelike compositions provided the “perfect blueprint for a rediscovery of the trivial on the part of Pop Art.”

In fact, Roy Lichtenstein’s 1978 “Stepping out” juxtaposed to Leger’s “Country Outing” of 1953 suggests a close relationship, especially in color. And a small Lichtenstein drawing is titled “Trompe l’Oeil With Leger Head and Paintbrush.” To Buettner, Leger was “a forerunner of Pop.” The show covers the key phases in Leger’s work, stretching from a large abstract “Woman in Blue” of 1912 to “Two Women Holding Flowers,” done a year before he died in 1955 at age 74.

A decisive moment had come when he served as a sapper on the front line in World War I. He later remembered having been stunned by the sight of an artillery piece in the sunlight. “It was the magic of the light on the metal,” he wrote. “That was all it took me to forget the abstract art of 1912-1913.” That marked the beginning of what became known as Leger’s “mechanical” period. On view is “Study for Mechanical Elements,” dated 1917, when he was released from the army after surviving a German gas attack.

But the stays in the United States, which he also crossed by bus, seem to have left a deeper mark on Leger, an enthusiast of the industrial revolution. When he sailed back to France in December 1945, though, he knew that he would never be back again, because he had joined the French Communist Party two months before his departure. But he never shifted in his work to the “socialist realism” favored by Communist leaders. Leger titled a canvas done after his return “Adieu New York” and painted those words in it.

He also increasingly spread his talents to other forms of art. Among them were stained glass projects for churches, murals and a mosaic he did in 1950 for the crypt erected in 1950 in Bastogne, Belgium, for tens of thousands of Americans killed or missing during the World War II battle in the Ardennes.