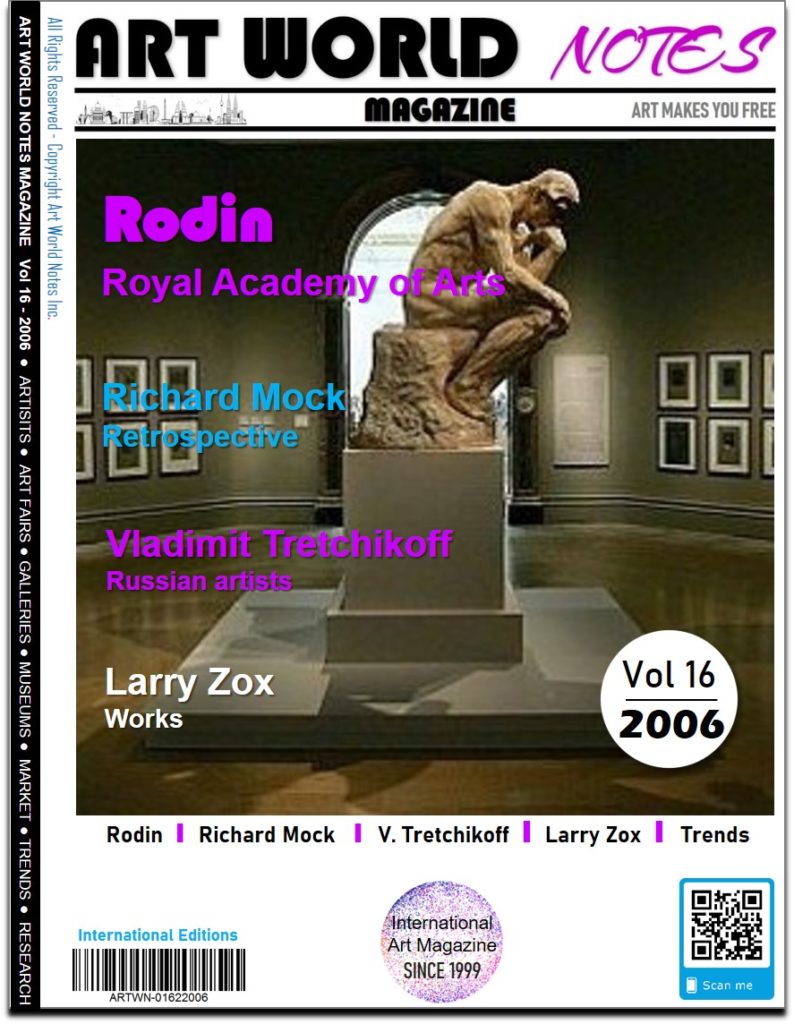 Cover: The Royal Academy’s colossal retrospective of the sculptor Auguste Rodin (1840–1917), the greatest sculptor since Bernini, is his first major exhibition in Britain for 20 years.The curator of the Royal Academy exhibition, Catherine Lampert, rightly stated that Rodin’s output was ‘overwhelming’ and so was this monumental exhibition in Burlington House

It is impossible for anyone to appreciate so many works in one visit so I focused on just a few that caught my attention and edited out the preparatory drawings, which were rather dreary.

The first sensation when entering this vast exhibition was a feeling of pain and hurt: it was a very painful and hurtful sensation experiencing such powerful and super life-like sculpture in the flesh: some were almost unbearable to confront, and had far more presence and reality than the members of the public who seemed so dead, unreal and mere representations.

The Walking Man (C. 1990) was for me the greatest work on display for its musical movement and poignant presence: – its heavy-lightness, – its masculine-femininity, – its alien allure. Despite being headless, it was strong headed as if the chest was wearing the face. Here one was confronted with the possibility of being headless whilst walking: of being able to walk ahead and head tall without a head. The Walking Man is paradoxically much more complete – much more whole – without having a head on and without wearing arms. The Walking Man is whole, finished and perfect in his incompleteness and fragmentation where being a broken ruin becomes a newly built being and a finished thing. I could have just seen this one ‘abimage’ and it would have been more than enough.

Jean d’ Aire – Monumental Nude (1887) reminded me of the Incredible Hulk with his green slime skin and bulky build and bulging eyes. What appear to be stains from streams of rain water give this incredible thing even more presence and power; as does the slender tall figure of Pierre de Wissant – Monumental Nude (1886) which also sports streams of rain-induced patination. Here hands and feet are distorted beyond being life-size yet seem to work so well and look so really real and Rodin actually makes you walk around this moving figure again and again. A notable feature of this exhibition is the extra amount of walking involved, for Rodin makes us circle his sculptures like sharks circling their prey.

Most moving of all were the heads of Pierre de Wissant (1886) which had eyes and mouths like freshly cut gaping wounds. Yet the mouths appear to be in a state of bliss before death and the no-eyes that are still there invite death in with delight. Seen out of context these heads give off the sensation of having just been severed, and are caught between the paradoxical emotions of agony-ecstasy, pleasure-pain, bliss-dread, life-death all at once – as if in a state of the abject-sublime staring death in the face. The irony being that the burghers of Calais were spared death, but Rodin depicts them before they were reprieved, gaunt, starving and resigned to death.

Large Clenched Hand (after 1900) becomes almost abstract and takes on a life of its own as an alien life form with titanic tentacles – the thing in itself – and no longer a human hand – trying to hold onto the air that gives it life.

Unexpectedly the most disappointing works were Rodin’s iconic images – The Thinker and The Kiss. As I was looking into The Thinker’s face I caught the sight of a real thinker – Harold Pinter – and thought that Rodin’s Thinker looked somewhat of a dullard. Pinter was peering at the behind of The Thinker and for a moment reminded me of Rodin’s Head of Balzac – larger than life and with deep penetrating eye sockets. Rodin’s Thinker is a cumbersome and over-worked thing and the face seems to be in a state of abject boredom: certainly not thinking.

The Kiss (1901-04) should have been called The Miss because both seem to pass each other by since they are not properly aligned to kiss. This clumsy and rather mannered work is totally devoid of drama, sensuousness and sexuality despite the overtly melodramatic subject matter. Rodin’s handling of marble in The Kiss is far too leaden, clinical and lacking in verve and emotion – bronze is Rodin’s medium, not marble.