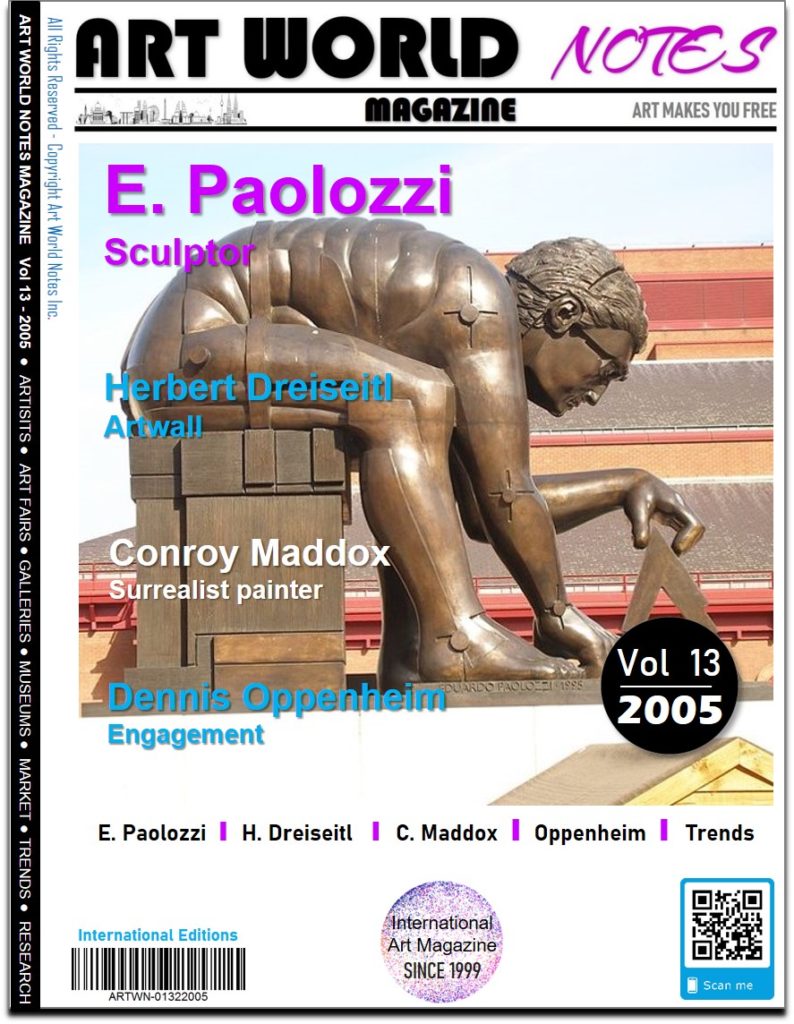 Cover: Sir Eduardo Paolozzi, one of the most influential British sculptors of the 20th century, has died in a nursing home aged 81. He had been confined to a wheelchair since a serious illness four years ago left him brain damaged.

Paolozzi was regarded as one of the founders of the British Pop Art movement. He first captured public attention with a range of vibrant and striking screenprints, and was a leading member of the Independent Group at the Institute of Contemporary Arts in London, a radical group of artists who pioneered British pop art in the 50s and early 60s.

Latterly he became better known as a sculptor, and his huge public works, largely lifelike statues often with cubic elements, brought him international fame and commissions. Some of his best known sculptures today include The Statue of Newton (after William Blake), 1995, in the piazza of the new British Library, the mosaic patterned walls of Tottenham Court Road tube station and the Piscator sculpture outside London’s Euston station.

Born in Leith in 1924, Paolozzi’s parents were Italian immigrants who ran a sweet shop. It was here that the young artist’s instincts for collecting curiosities were first aroused, and he amassed a huge collection of cigarette cards and matchboxes.

He studied at Edinburgh College of Art and London’s Slade school. A spell studying in Paris brought him under the influence of surrealism and dada. He was one of the first British artists to take on board Pop Art sensibilities from the United States. “He had a serious claim to be the first pop artist, making collages featuring pin-up girls and modern kitchens in the 1940s,” said Guardian art critic Jonathan Jones.

Paolozzi always said that he worked instinctively, and was an evangelist for increasing access to art and sculpture. “If it [sculpture] is out in a railway siding or it’s stuck under your nose for the ordinary commuter who might not otherwise go to a sculpture park they can’t miss it,” he once said. He was a prolific sculptor: some of his many public commissions can be seen inside the Queen Elizabeth II conference centre, in the courtyard of the Royal Academy, outside the British museum and the Science museum. He created the cast-aluminum doors at Glasgow’s Hunterian gallery.

At the time of his collapse in 2000 he was working on a number of projects including set designs for a production of The Magic Flute, and bronze doors and stained glass windows for St Giles cathedral and St Mary’s church, respectively, in Edinburgh.

Knighted in 1989, three years previously he was appointed Her Majesty’s Sculptor-in-Ordinary for Scotland. A permanent display of his work and a reconstruction of his studio is housed in the Dean Gallery in Edinburgh. Paolozzi is survived by his three daughters and his former wife.