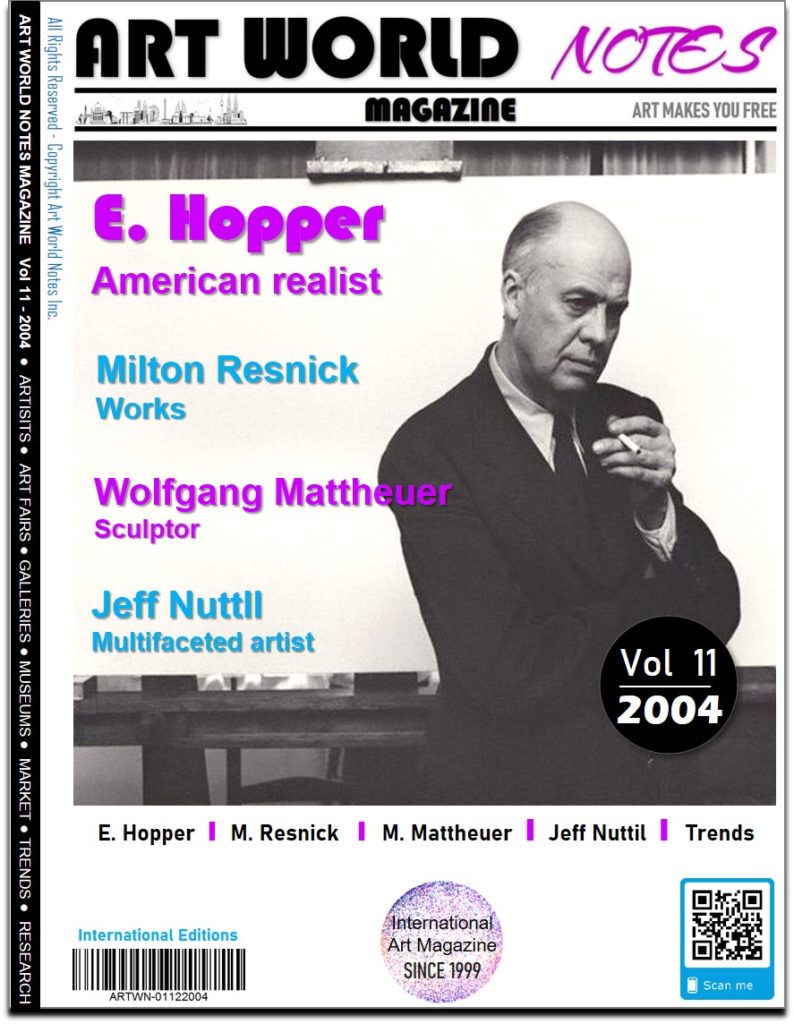 Cover: The Tate Modern — housed in a stark, angular former power plant on the south bank of the Thames — seems to have found an artist perfectly suited to the vast and formidable spaces of one of Britain’s premier museums. And he is an American. He is Edward Hopper.

Edward Hopper, whose brooding paintings, most famously “Nighthawks,” have been said to symbolize the loneliness of contemporary existence, is drawing sellout crowds, even at $17 a ticket. And the exhibition, the first major retrospective of Hopper’s work in Europe in a generation, has set tongues wagging.

To British art viewers and critics, Hopper lays bare a barrenness in American life that is well suited to a time when the ideal of America as a forward-thinking, optimistic country is under assault across Europe.

If Hopper’s art is in the eye of the beholder, it is interesting what some interpreters are concluding about life in the United States as they wander through the high-ceilinged gallery rooms. Some see his oeuvre through a very dark lens, such as one writer who asserted that Hopper’s paintings, drawing on “a museum of national weirdness,” are kin and forerunners to the recent photographs of abuse taken by the guards at Iraq’s Abu Ghraib prison.

“Americans have never looked as lonely as they do now — except in the paintings of Edward Hopper. America has never seemed as baffling as it does at this moment — except through the eyes of Hopper,” said the writer, Jonathan Jones, an art critic for the Guardian newspaper.

He said he found Hopper’s America “shocking, perplexing and surreal” — a place of houses “that all look like they belong to serial killers.”

Be that as it may, since the show opened May 25, more than 63,000 people have turned out to see the 70 works by a 20th century artist who, though familiar, is not well known on this side of the Atlantic.

Sheena Wagstaff, the head of exhibitions and display at the Tate Modern, who conceived and assembled the show with the cooperation of the Whitney Museum of American Art in New York and other U.S. art institutions and collections, said it was not her intention to emphasize Hopper as an American painter.

Rather, she said, she feels he has been too often miscast as a regional or national artist, and not as a universal artist. Some of his strongest influences were European, she noted, pointing to Hopper’s three trips to Europe in the first decade of the 20th century and his keen interest in the works of realist painters such as Degas.

“He is a crucially important American artist, but his real importance is completely international,” she said. “He is alone as a painter of figurative scenes in combining artistic roots in 19th century European realism, meshed with a 20th century, modern sensibility enabled by a unique use of cinematic vocabulary.”

Because Hopper, an avid film- and theatergoer, constructed many of his paintings almost as stills from a movie, she said, viewers have long supplied their own spectrum of interpretations for the scenes.

The exhibition, which runs until September and then will travel to the Museum Ludwig in Cologne, Germany, also points out the many ways that Hopper altered reality — removing extraneous details for a minimalist effect, or shifting patterns of light — to suit his purposes. “Hopper is not the great Realist painter that many people set him up to be, because he has a very unique view of what reality is,” Wagstaff said.

Born in 1882 in the Hudson River town of Nyack, N.Y., where his family home is now a museum, Hopper lived in Manhattan most of his life, summering in New England.

A taciturn and moody man, he spoke through his art, painting continuously for more than 60 years until his death in 1967.

Most of his paintings show individuals — often his artist-wife, Josephine, was the model — glimpsed in isolated or mysteriously uncommunicative poses, looking weary or defeated or bored, and set against some sort of void such as a darkened street, a window or a stage.

Some of his most striking works have no people in them at all but rather architectural elements: a staircase or an isolated clapboard house, a lighthouse on a dune, a row of brownstones red in the morning sun, a series of roofs observed as if from a passing train, or even a room inhabited only by the light from an open door.

Although Hopper’s works are widely available here in posters, postcards and other reproductions, few Europeans have actually seen the originals because his paintings do not show up in any of the great European collections.

In seeing them now at the Tate Modern, critics have been divided about their value — with many criticizing his lack of painting skill, especially when it comes to showing people, or panning his bleak worldview.

“There are few adverbs or adjectives, and he painted the world in simple declarative terms. He has, as a painter, what one can call a great tone of voice — one fitting for his times and the world as he saw it. One of his great strengths is that he never forced himself to be flashy,” Searle wrote.

But Waldemar Januszczak, art critic for the Times of London, found that the show reminded him that the New York of today has become stuck in time, and it is now London that is vibrant and unafraid of change.

“New York is stuck in its glum past. It is stuck in — well, an Edward Hopper painting,” he said.

Of the paintings themselves, he said they celebrate the wrong sorts of thing.

“What is being proposed is a new type of pictorial heroism: the heroism of failure. At some point in its cultural stalling, the world began to confuse inertia, impotence, poky hotel rooms and losers with things to look up to,” he said.

“It’s a world-view imported from America. And Edward Hopper, as we see throughout this superbly judged journey, was an iconic creator of that world-view.”

Andrew Graham-Dixon, in the Sunday Telegraph, believes Hopper wished to comment on America. “His work captures a bathetic and unheroic phase of American history; the pioneering spirit has exhausted itself, cities have spread, and the land no longer seems so full of God’s promise. He often paints people looking out of windows, as if searching in vain for some sign of transcendence or revelation.”

But Richard Dorment, in the Daily Telegraph, said conveying an atmosphere, and not the specific pictorial representation, was the real goal for Hopper.

“We may well interpret these pictures as comments on the sadness and alienation of American life, but that is our choice,” he wrote. “Hopper’s own point of view is never stated.”