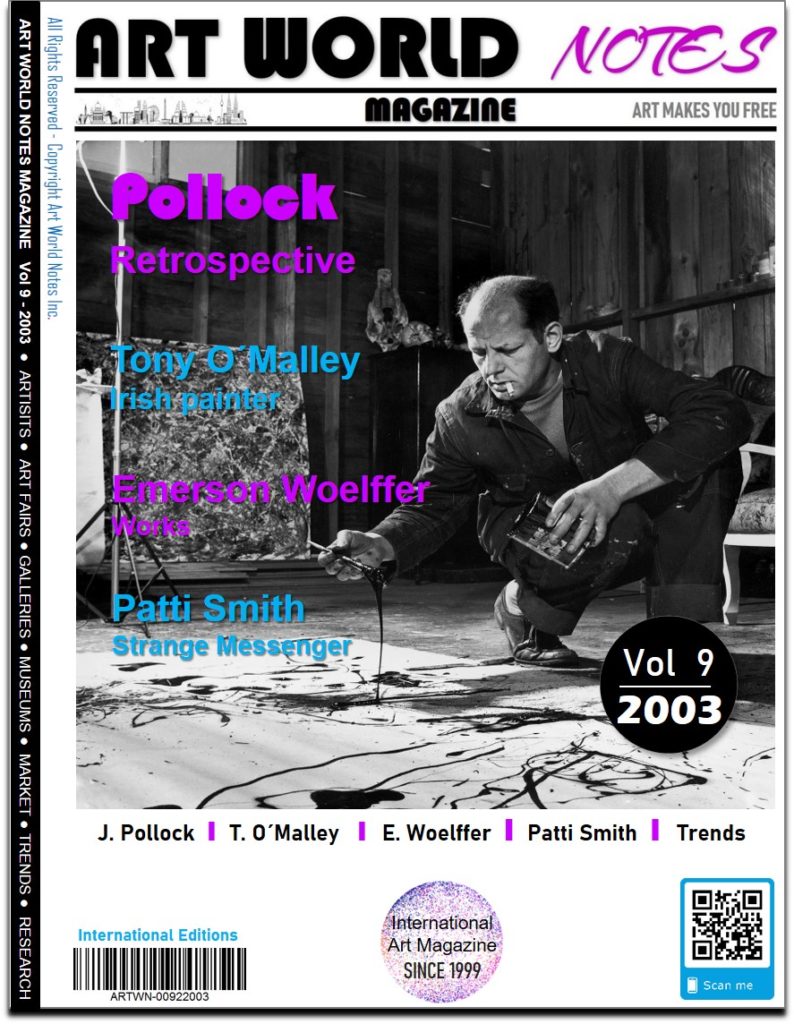 The In 1947 Jackson Pollock arrived at a new mode of working that brought him international fame. His method consisted of flinging and dripping thinned enamel paint onto an unstretched canvas laid on the floor of his studio.This direct, physical engagement with his materials welcomed gravity, velocity, and improvisation into the artistic process, and allowed line and color to stand alone, functioning entirely independently of form

His works, which came to be known as “drip paintings,” present less a picture than a record of the fluid properties of paint itself. Though self-reflexive in nature, they readily inspire larger interpretations; the explosive, allover expanses of Number 1A, 1948 (1948) and One: Number 31, 1950 (1950) can be seen as registering a moment in time marked by both the thrill of space exploration and the threat of global atomic destruction. During the Cold War, Pollock’s paintings and those of his Abstract Expressionist peers, including Mark Rothko, Franz Kline, and Willem de Kooning, were promoted, in exhibitions toured abroad by MoMA’s International Council, as emblems of the freedoms fostered under liberal democracy.

Pollock came to New York in 1930, as a young art student from Los Angeles. While taking classes at the Art Students League, he pursued a close mentorship with painter Thomas Hart Benton and immersed himself in Surrealism and the subconscious; the mural painting of Mexican socialists David Alfaro Siqueiros and José Clemente Orozco; and the work of Pablo Picasso, including his Girl before a Mirror and Les Demoiselles d’Avignon. For several years, he worked for the Federal Arts Project of the Works Progress Administration (WPA). Pollock enjoyed recognition beginning in the early 1940s, with the support of critic Clement Greenberg and collector-gallerists Betty Parsons and Peggy Guggenheim. Under Alfred H. Barr, Jr.’s directorship, MoMA became the first museum to acquire a painting by Pollock, The She-Wolf (1943), out of the artist’s first solo show that year at Guggenheim’s Art of This Century gallery. In 1956, at the age of 44, the artist died behind the wheel of his car. His wife, painter Lee Krasner, would do much to further his legacy after his death, including donating major works to MoMA’s unparalleled Pollock collection.

The profound influence of Pollock’s approach—at once emphatically literal and radically open to the world—may be found in the words of his fellow artists. The experimental Gutai group, which formed in Japan in the mid-1950s, cited his work as a crucial encouragement to “impar[t] life to matter” and pursue “pure creativity.” In 1958, Happenings impresario Allan Kaprow wrote in Art News in honor of the late artist: “[Pollock] left us at the point where we must become preoccupied with and even dazzled by the space and objects of our everyday life…these, I am sure, will be the alchemies of the 1960s.” Nine years later, Minimalist sculptor Donald Judd would write in Arts Magazine, “It’s clear that Pollock created the large scale, wholeness and simplicity that have become common to almost all good work.”