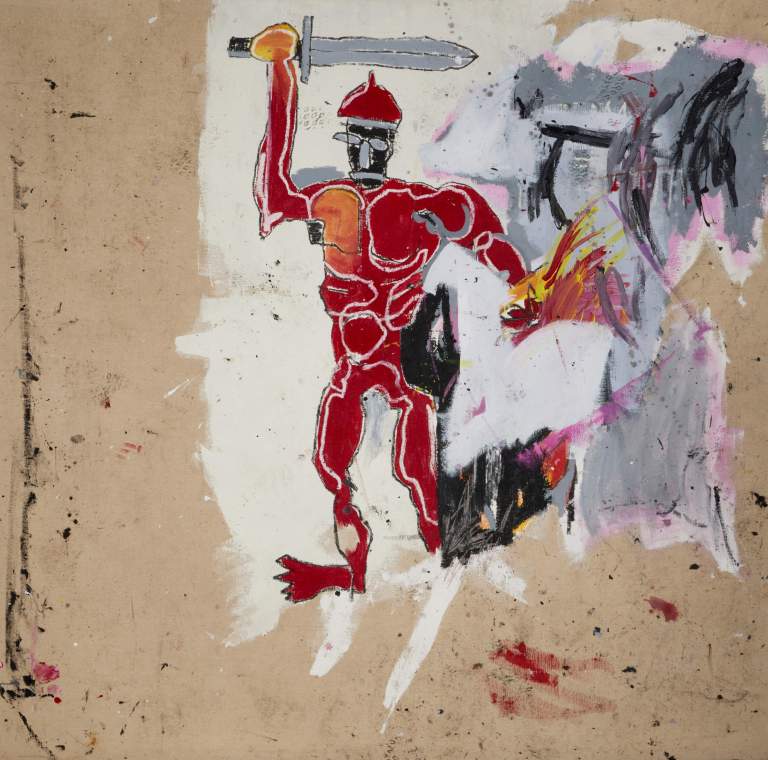 As the global craze for works by Jean-Michel Basquiat continues, Sotheby’s will offer a painting from the artist’s “Warrior” series in Hong Kong this October. Untitled (Red Warrior), from 1982, will hit the auction block for the first time during a contemporary art evening auction on October 9. It is expected to sell for HKD 150 million–200 million (roughly $19.2 million–$25.7 million).

The six-and-a-half-foot-wide work depicts a muscular red-figure wielding a sword. It is one of several “Warrior” works still held privately. Another “Warrior” work from the same period sold for HKD 323.6 million (or $41.7 million) at Christie’s Hong Kong in February.

Untitled (Red Warrior) was exhibited in a Basquiat show at New York’s Vrej Baghoomian Gallery in 1989, the year after the artist died. In 2004, the painting was featured in the exhibition “Picasso, Bacon & Basquiat” at Tony Shafrazi Gallery in New York.

“Basquiat was the ultimate warrior, taking on the establishment and defiantly positioning himself at the center of his canvases and of the new order he single-handedly created,” Alex Branczik, chairman of modern and contemporary art of Sotheby’s Asia, said in a statement. “He is now a global phenomenon who captivates not only the world’s top collectors but also the collective imagination of our entire generation.”

Basquiat’s works from 1982, made when the artist was 22, are among the most sought-after ones by him. In May, Versus Medici (1982), depicting a black figure against scrawled phrases, sold at Sotheby’s for $50.8 million.