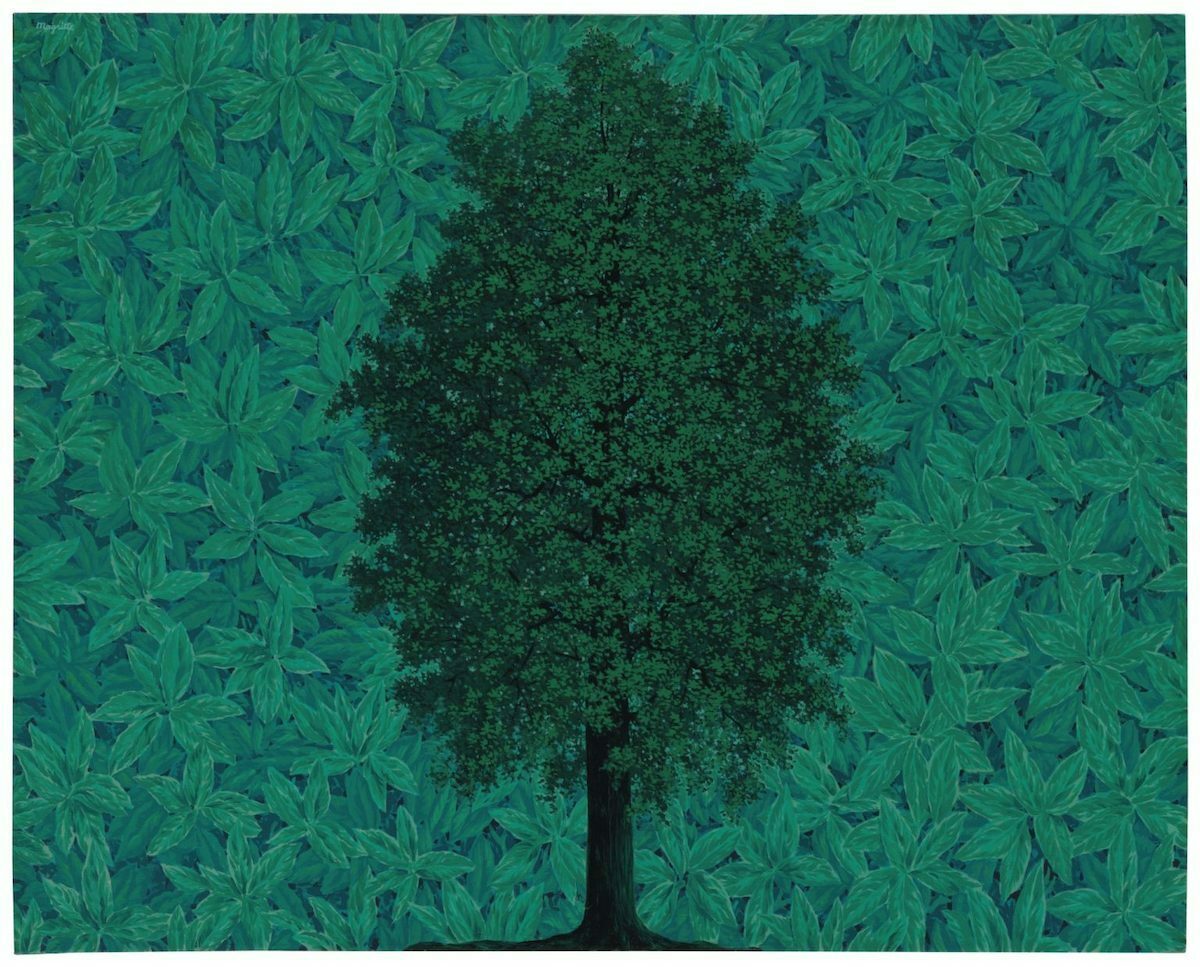 Christie’s has unveiled a painting by Belgian-surrealist René Magritte to highlight the London session of its global “ONE” sale of modern and contemporary art scheduled to take place on July 10.

Standing at 4 ¼ by 5 ⅓ feet, L’Arc de Triomphe depicts a single tree set against a background of leaves; typical of the artist’s postwar period, the motif also features in several of the artist’s important works from the era. The work is expected to sell for £6.5 million–£9.5 million ($8.1 million–$11.9 million).

The painting was originally in the collection of Harry Torczyner, Magritte’s close confidante and American attorney, who acquired the painting in April 1962, just after the painting was completed in March. Torczyner was a key player in promoting Magritte’s work in America and published a series of letters with the artist in the 1994 title Magritte-Torczyner: Letters Between Friends.

In November 1998, the Torczyner estate sale at Christie’s in New York brought a total of 14 Magrittes to auction including 1952’s Les valeurs personnelles (Personal Values), which went for $6.5 million, against its pre-sale estimate of $2.5 million–$3.5 million and now resides in the San Francisco Museum of Modern Art. The work going up for sale in London last came to market in 1992 when it sold in a Christie’s New York sale for $1.1 million. It was acquired by the current seller later around 2000.

The painting carries an expansive exhibition record, having been first shown at the Palais des Beaux-Arts de Charleroi in 1962, and having later appeared in the “Dada, Surrealism, and Their Heritage” show that traveled to the Museum of Modern Art, LACMA, and the Art Institute of Chicago in 1968. Famed New York dealer Sidney Janis showed the work in a solo survey dedicated to the artist in December 1977 and the painting was last shown publicly in 1992 at the Christie’s sale.

“The choice of title suggests Magritte believed that this composition was a triumph in his quest to answer the problem of how to represent trees whilst also revealing the mystery of reality,” said Olivier Camu, deputy chairman, Impressionist and modern art at Christie’s in London in a statement. For Magritte, the forest motif represents, Camu observes, “nature as an essential theme in his perception of reality.“

The artist saw a new record price at Sotheby’s in November 2018, when Le principe du Plaisir from 1937 —featuring a suited sitter with an aura of light replacing his head—sold for $26.8 million in a Sotheby’s Impressionist and modern evening sale, surpassing its estimate of $15 million–$20 million. The sale set the artist among the top selling modernists currently on the market.

According to Camu, there are 19 other works comparable in size that exist with 15 held in museum collections. The works which feature the tree motif central in the painting coming up for sale include Magritte’s 1954 canvas L’empire des lumières, which resides in the Guggenheim collection in New York. The work going up for sale is one of five comparables still held in private hands, including Le seize septembre from 1957 that sold in a Christie’s New York sale in November 2019 for $19.6 million, nearly doubling its estimate of $7 million to $10 million.

The demand for the surrealist movement has expanded since Camu established the “Art of the Surreal” sale in February 2001. Since then, Camu notes, the “the market for Surrealism has been rising steadily. Surrealist artists were a major influence on post-war American abstract expressionism with their early ideas of chance-led application of paint.”

“Magritte in particular has risen even more strongly than others maybe because he is such an intellectual and poet. And yet, Magritte is accessible to all,” said Camu, adding that painter’s “way of subverting reality” through “impossible combination” of realistic images drives the artist’s value among collectors.

The Christie’s “ONE” sale will be the auction houses’ test for both the new evening sale format and the market at-large. With auction houses now opening in Europe following the lift of local coronavirus restrictions, Christie’s will preview the work in its King Street location to clients by appointment.