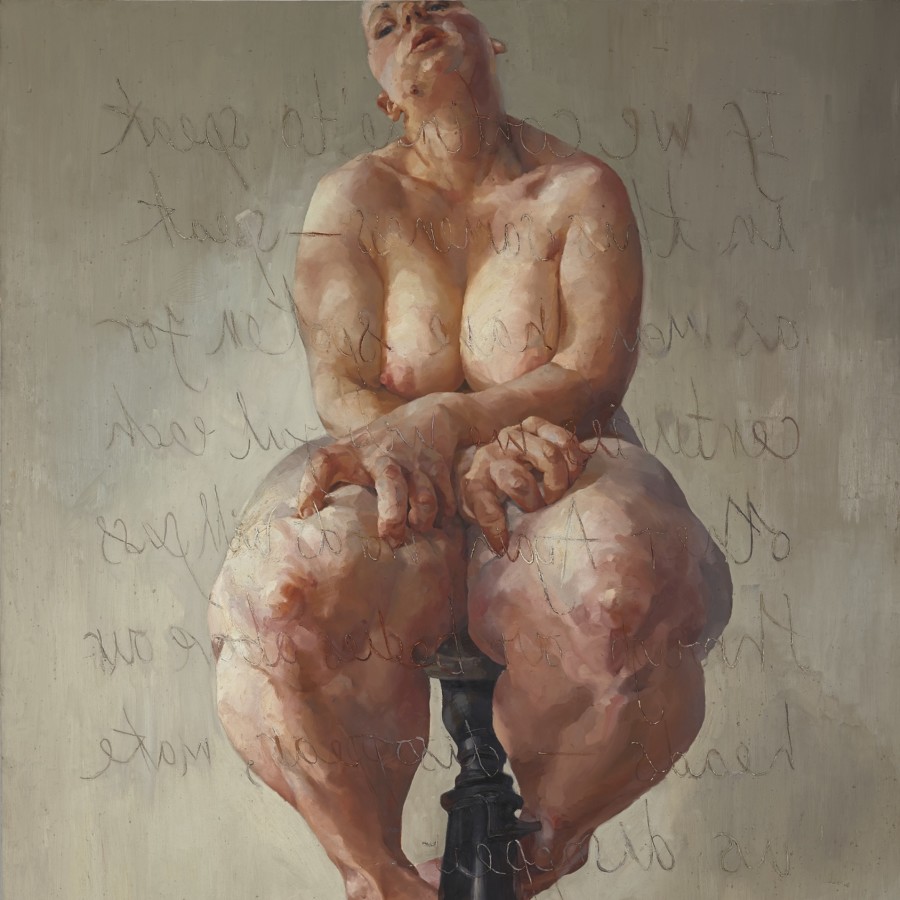 On Friday night, in a salesroom at Sotheby’s London, Jenny Saville’s masterful seated nude self-portrait Propped (1992), which features the artist gazing down at the viewer, with a long quotation from a feminist French critic scribbled across the canvas, made a record-shattering £9.5 million ($12.4 million) against an estimate of £3 million to £4 million.

That figure is not only the new high mark for a Saville at auction, it is also the most ever paid at auction for the work of a living female artist.

Originally owned by Charles Saatchi and first brought to worldwide attention at the “Sensation: Young British Artists from the Saatchi Gallery” exhibition at the Royal Academy in London in 1997, the painting was the top lot at Sotheby’s evening sales, and was certainly the highlight of London’s auction season.

The painting appeared in “The History of Now: The Collection of David Teiger,” a 25-lot single-owner sale—separate from the house’s standard contemporary evening sale—that was organized to benefit the Teiger Foundation for the Support of Contemporary Art. It realized a whopping £35.9 million ($46.8 million) for the late art patron’s organization.

Eight bidders contested the Saville in a marathon ten-minute bidding battle that was ultimately won by an anonymous telephone bidder represented by Helena Newman, Sotheby’s worldwide head of Impressionist and modern art.

Taking the title for the most expensive work ever sold at auction by a living woman artist, it surpassed Cady Noland’s Bluewald (1989), which went for $9.8 million at Christie’s New York in May 2015. (That startling sculptural relief features the visage of Lee Harvey Oswald at the moment Jack Ruby shot him in a Dallas jail staging area, as captured on television. In Noland’s piece, Oswald has a miniature American flag stuffed in his mouth.)

Despite the new high mark for women artists, the record for a work by a living male artist at auction remains far, far higher: that belongs to the orange Jeff Koons “Balloon Dog” sculpture that sold for $58.4 million at Christie’s New York in 2013.

Teiger bought tonight’s star lot from Gagosian London in 2004 for an undisclosed price, back when the artist’s auction high was just $400,000. There’s no information, as yet, as to where Propped will be domiciled.

Sotheby’s overall tally for the night, thanks largely to the Teiger sale, was £68.7 million ($89.6 million), a 23 percent increase over last October’s £50.3 million ($66.5 million) result. (That sum did not include the roughly $1.4 million winning bid on a Bansky work that then proceeded to self-destruct, sliding through a shredder in its frame )

In a less robust vein, Phillips’s 20th-century and contemporary art evening sale, held at 5 p.m. at its Berkeley Square headquarters totaled £20.2 million ($26.4 million). It, too, was topped by the work of a female artist: Joan Mitchell’s color-charged abstraction Perch and Twirl (1973), which sold to an anonymous telephone bidder for an above-estimate £3.13 million ($4.09 million).